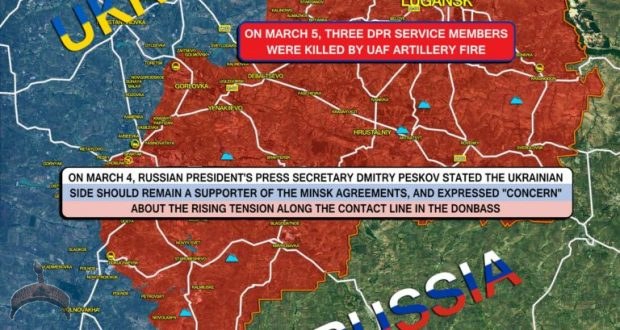 Posted by: BalogunAdesina in World News Comments Off on Eastern Ukraine On Brink Of New Attempt Of Kiev Forces’ Offensive

The situation in eastern Ukraine continues to escalate due to aggressive actions of the Kiev regime. Over the past weeks, Kiev forces have been continuously increasing the rate and intensity of artillery strikes and attacks on positions of self-defense forces of the Donetsk People’s Republic (DPR) and the Lugansk People’s Republic (LPR).

These actions triggered a series of clashes between pro-Kiev forces and DPR/LPR self-defense units. In several cases, DPR and LPR responded with counter-battery fire and other active actions to neutralize the aggressors. At the same time, local sources report that the scale of violations by pro-Kiev forces are unprecedented for the recent months and local self-defense units still respond to ceasefire violations not enough (because they respect the ceasefire regime).

A brief overview of the recent developments:

On March 5, three DPR service members were killed by UAF artillery fire
On March 6, artillery of the DPR/LPR forces targeted UAF positions near Vodiane
On March 6, the DPR/LPR forces targeted positions of the UAF forces by grenade launchers near Pavlopil
On March 4, Russian president’s press secretary Dmitry Peskov stated the Ukrainian side should remain a supporter of the Minsk agreements, and expressed “concern” about the rising tension along the contact line in the Donbass

Meanwhile, several reports appeared that the Kiev regime is deploying additional units of heavy weapons and military equipment to the contact line. These reports are in fact confirmed by OSCE reports. The OSCE SMM reported that for about a week the 19 T-72 battle tanks, 64 T-64 battle tanks, and over 100 units of artillery systems ‘disappeared’ from storage sites of the Ukrainian Armed Forces. These equipment and weapons are in fact being moved to the contact line, according to DPR and LPR sources.

Another sign of the nearing escalation is the increasing censorship campaign inside Ukraine itself (the Kiev regime openly bans and persecutes political opponents and opposition media), mainstream media and on mainstream social media platforms.

Just recently, Facebook banned an article of the pro-opposition Russian news website, RBC, that was quoting a report of the Russian Federal Security Service regarding the detention of a cell of radicals linked to the Ukrainian neo-Nazi radical group “MKU”. Facebook used claims of ‘Ukrainian experts’ that alleged that the cell has no links to Ukraine to censor information. These claims of ‘media specialists’ receiving funding from various US- and EU-funded propaganda structures go contrary to the investigation of the Russian security service.

This is one of multiple examples of blatant censorship on mainstream social media platforms. The new wave of bans and limitation of the audience’s access to vestiges of independent sources of coverage remaining on these platforms may highlight the preparations of these platforms for some important developments.