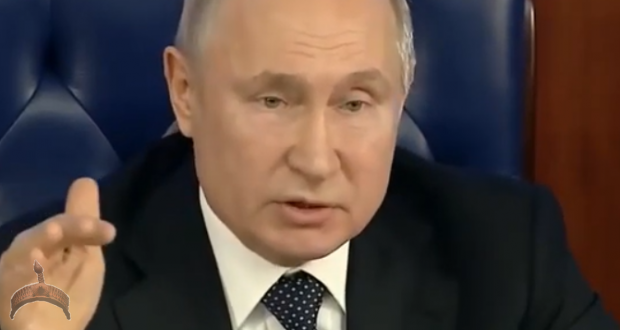 Posted by: AbubakarMuhd in World News Comments Off on Important Statement by Putin on Russia’s Super Weapons

December 24, 2019 – “Russia will continue to develop its nuclear forces until the world starts working on a new agreement on nuclear weapons control.” That was promised today by Vladimir Putin. The president chaired a session of the extended Collegium of the Ministry of Defence today. One of the chief results of 2019 – the share of new weapons in the nuclear triad is 82%. The army already received the “Avanguard” hyper-sonic systems, from which no aggressor will be able to protect themselves in the foreseeable future. This is exactly what the country’s weapons should be – the best in the world. Yevgeny Reshetnyov reporting.

Besides the stocktaking for the passing year and setting the goals for the future, the session of the Collegium heard strategic declarations from the Commander in Chief.

“No country in the world,” Putin declares, “has hyper-sonic weapons, more so the one capable of reaching across continents.” Russia has the airborne “Kinzhal” systems which are already in active service. The army has already received the “Peresvet” laser combat systems, whose name, after the legendary bogatyr warrior, was chosen by a popular vote. This week the “Avanguard” missile system will commence combat duties near Orenburg. This is the newest design and we are proud of its success in starting the active duty.

The Russian military has also demonstrated the “Avanguard” to the American inspectors, thus adhering to the Strategic Arms Reduction Treaty, while the USA, by the looks of it, continue on the road of destruction of the agreements, which were reached with such difficulty.

Putin: “The degradation of the weapons control system is a cause for a serious concern. I’m not only referring to the breaking by the United States of the Intermediate-Range Nuclear Forces Treaty under totally artificial pretexts that have no grounds whatsoever. As of last November, Washington also created uncertainty as to its participation in the Open Air Treaty. Unclear is also the future of Strategic Offensive Reductions Treaty. I must add that all this takes place along the strengthening of the US global anti-missile defence capabilities. We see it, and understand. In view of this, we must continue to develop our army and navy.”

The US military budget will exceed $750 billion dollars next year. It is comparable to the combined defence effort of the rest of the world.

Sergei Shoygu – Russian Minister of Defence: “While the military budget of the US and other continues to grow each year, the Russian military budget has remained practically unchanged for the past few years. While in 2018 we were 7th among the leading countries in our military spending, this year we are 8th and next year we will drop to the 9th place.”

However money isn’t always the decisive factor, if taken into account that Russia, with its moderate expenditure, introduces a unique new air defence system “Vityaz’”. There is also no competition for the hyper-sonic missile “Zircon”, which will be deployed on combat vessels and on shore. The “Sarmat” missile – the military is preparing the flight tests – will replace the most powerful in the world silo-based strategic missile “Voyevoda”. All these latest developments were first announced by Vladimir Putin last year during his address to the Federal Assembly, which became a sensation. Back then, the president announced another super weapon. The cruise missile with unlimited range “Burevestnik”. Today the president confirmed that the work on it is on schedule.

Putin: “How are we able to, must be able to, and will be able to remain in the lead? By using our brains. By intellect. By a better work organisation. By minimizing theft and sloppiness. By concentrating our effort in the principle directions which will secure for us a high level of the country’s defence.”

The Aerospace Forces will receive over a hundred modern flying units. As an illustration, the spacious atrium of the Ministry building became an exhibition ground for models of the advanced weapons. Everything most recent and modern that the army has is here today, from knives to combat vessels, satellites and fighter planes. The president visited the exhibition with interest although the Commander in Chief has already seen many of the samples in action at the training grounds. The work on creating the “Sarmat” missile system continues. The new design for the paratroopers is this parachute for jumping in tandem, if you don’t count the dogs. The military dog as of today has done 12 jumps. During the visit, Putin heard many times: “This is the weapon that equals the best in the world.” Later the president noted: “We need it to be better than the best.”

Putin: “This is not a chess game where sometimes we can be content with a draw. This is the military organisation of the state. The hardware must be better. We can achieve that. We do achieve that in the key directions of development. This must be the case for all the components.”

Next year the Navy will receive 14 ships, 3 submarines, 18 gunboats and auxiliary vessels. There are so many ships being built that journalists wonder if there’s enough imagination to come up with names for all of them. These are either the names of outstanding military and political figures of the Russian State, or the names of our cities.

Nikolai Patrushev – Secretary of the Security Council of Russia: “We indeed have modern weapons today. We’ve learn to use it. We do it effectively. And we spend minimum of resources.”

The share of new weapons in the nuclear triad has reached 82%. This is reassuring, taking into account that NATO and the US don’t abandon attempts to surround Russia with missile systems. The chief task will be solved having this in mind – by the end of next year, the share of modern weapons in the armed forces will have to be no less than 70%. Many branches of armed forces have already reached this level, but the main goal which the Commander in Chief voiced today is not just to reach certain levels but to remain at these set levels. Modernization and delivery of new modern types of weapons to the army must be ongoing. Yevgeny Reshetnyov, Mikhail Alterkopeh and Viktor Mamayev, Vesti from the Ministry of Defence.

At the Collegium, the president spoke about the historic memory which Russia will defend. He commented on the recent resolution of the European Union parliament which places the blame for starting WWII on Hitler’s Germany and the Soviet Union. During the building of the Russian Armed Forces, we must have in view the position of those countries which demolish the monuments to the Red Army soldiers. Attempts to rewrite history are made by the followers of those who negotiated with Hitler before the war and applauded his ideas. As an example the president named the Polish diplomat Józef Lipski, who was the ambassador to Germany until 1939.

Putin: “Hitler informed the Foreign Minister and then the Polish ambassador in Germany he openly told them that he had an idea to deport the Jews to Africa. To the colonies. Imagine that. 1938. Deport the Jews to Africa to die, to be destroyed. To which the Polish ambassador answered that if he would do that, they’d build a magnificent monument to him in Warsaw. He associated with Hitler in his anti-Jew, anti-Semite views completely. And moreover, he promised to build him a monument in Warsaw for persecution of the Jewish people. I must stress here that it is exactly people like this who back then negotiated with Hitler, are exactly these sort of people today that demolish monuments to the Red Army soldiers who liberated the European countries and nations from the Nazis. These are their followers. Unfortunately not much has changed in this regard. And we must have that in view when building our armed forces as well.”

The conversation about the attempts to distort history was continued at the head of state’s meeting with leaders of the Federal Assembly. The Speaker of the Duma promised that the Russian MPs will do everything in order to deliver the truth about the events 80 years ago to their colleagues in PACE and to the parliaments of European countries.

Vyacheslav Volodin – Speaker of the Duma: “Having in mind that at the time Poland de facto associated with fascist Germany, and saw it possible to destroy an entire people by deporting them to Africa, and supported Hitler in it, the Polish leadership would do better to issue an apology for what took place then and for the fact that they have been trying to conceal that, while redirecting the blame to others, inventing something and accusing. This would be at least honest on their part.”

Putin: “I already spoke about this. I only wish to add that the Soviet Union gave assessment to the Ribbentrop-Molotov Pact. It did it honestly and openly. No one did it but us. The legal basis for cooperation with Nazi Germany of many European states was built starting from 1934. And the absolute majority of leaders of these states had personal meetings with Hitler, and put their signatures under the appropriate documents. Stalin, no matter what you think of him, never stained himself with personal contacts with Hitler. He never met him. While the leaders of many European countries did just that.”