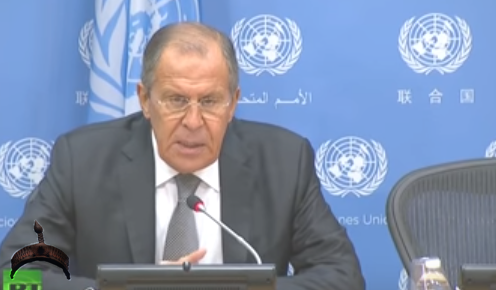 Posted by: BalogunAdesina in World News Comments Off on Lavrov’s remarks at the 73rd session of the UN General Assembly

The speeches delivered during the general discussion at this session of the UN General Assembly confirm the fact that international relations are going through a very complex and contradictory historical stage.

Today, we are witnesses to a collision of two opposing trends. On the one hand, the polycentric principles of the world order are growing stronger and new economic growth centres are taking shape. We can see nations striving to preserve their sovereignty and to choose the development models that are consistent with their ethnic, cultural and religious identity. On the other hand, we see the desire of a number of Western states to retain their self-proclaimed status as “world leaders” and to slow down the irreversible move toward multipolarity that is objectively taking place. To this end, anything goes, up to and including political blackmail, economic pressure and brute force.

Such illegal actions devalue international law, which lies at the foundation of the postwar world order. We hear loud statements not only calling into question the legal force of international treaties, but asserting the priority of self-serving unilateral approaches over resolutions adopted by the UN.

We are witnessing the rise of militant revisionism with regard to the modern international legal system. The basic principles of the Middle East settlement process, the Joint Comprehensive Plan of Action on the Iranian nuclear programme, commitments under the World Trade Organisation, the multilateral climate agreement, and much more are under attack.

Our Western colleagues seek to replace the rule of law in international affairs with some “rules-based order.” These rules, which are made up as political expediency dictates, are a clear case of double standards. Unjustified accusations of interference in the domestic affairs of particular countries are made while simultaneously engaging in an open campaign to undermine and topple democratically elected governments. They seek to draw certain countries into military alliances built to suit their own needs, against the will of the people of those countries, while threatening other states with punishment for exercising freedom of choice in their partners and allies.

The aggressive attacks on international institutions are accompanied by attempts to “privatise” their secretarial structures and grant them the rights of intergovernmental bodies so that they can be manipulated.

The shrinking space for constructive international cooperation, the escalation of confrontation, the rise in general unpredictability, and the significant increase in the risk of spontaneous conflicts – all have an impact on the activities of this world organisation.

The international community has to pay a high price for the selfish ambitions of a narrow group of countries. Collective mechanisms of responding to common security challenges are faltering. Diplomacy, negotiation and compromise are being replaced with dictates and unilateral exterritorial sanctions enacted without the consent of the UN Security Council.  Such measures that already affect dozens of countries are not only illegal but also ineffective, as demonstrated by the more than half-century US embargo of Cuba that is denounced by the entire international community.

But history does not teach the same lesson twice. Attempts to pass verdicts without trial or investigation continue unabated. Some of our Western colleagues who want to assign blame are content to rely on assertions in the vein of the notorious “highly likely.” We have already been through this. We remember well how many times false pretexts were used to justify interventions and wars, like in Yugoslavia in 1999, Iraq in 2003 and Libya in 2011.

Now the same methods are being used against Syria. On April 14, it was subjected to missile strikes carried out under an absolutely falsified pretext, several hours before international inspectors were supposed to arrive at the site of the staged incident. Let the terrorists and their patrons be warned that any further provocations involving the use of chemical weapons would be unacceptable.

The conflict in Syria has already lasted for seven years. The failed attempt to use extremists to change the regime from the outside nearly led to the country’s collapse and the emergence of a terrorist caliphate in its place.

Russia’s bold action in response to the request of the Syrian Government, backed diplomatically by the Astana process, helped prevent this destructive scenario. The Syrian National Dialogue Congress in Sochi, initiated by Russia, Iran and Turkey last January, created the conditions for a political settlement in line with UN Security Council Resolution 2254. The intra-Syrian Constitutional Committee is being established in Geneva on precisely this basis. Rebuilding ruined infrastructure to enable millions of refugees to return home as soon as possible is on the agenda. Assistance in resolving these challenges for the benefit of all Syrians, without any double standards, should become a priority for international efforts and the activities of UN agencies.

For all the challenges posed by Syria, Iraq, Yemen and Libya, it would be unacceptable to ignore the protracted Palestinian problem. Its fair resolution is critical to improving the situation in the entire Middle East. I would like to warn politicians against unilateral approaches and attempts to monopolise the peace process. Today, the consolidation of international efforts in the interests of resuming talks on the basis of UN resolutions and the Arab Peace Initiative is more in demand than ever before. We are doing everything to facilitate this, including in the format of the Middle East Quartet and in cooperation with the Arab League and the Organisation of Islamic Cooperation. Mutually acceptable agreements should ensure the peaceful and safe co-existence of the two states – Israel and Palestine.

Here in the UN that was built on the lessons of World War II we are all obliged to think about the future and not repeating the mistakes of the past. This year is the 80th anniversary of the Munich conspiracy that crowned the criminal appeasement of the Third Reich and serves as a sad example of the disastrous consequences that can result from national egotism, disregard for international law and seeking solutions at the expense of others.

Regrettably, today in many countries the anti-Nazi vaccine has not only weakened, there is a growing campaign to rewrite history and whitewash war criminals and their accomplices. We consider sacrilegious the struggle against monuments to the liberators of Europe, which is going on in some countries. We are calling on UN members to support a draft resolution of the UN General Assembly denouncing the glorification of Nazis.

The growth of radical nationalism and neo-Nazism in Ukraine, where criminals who fought under SS banners are glorified as heroes, is one of the main factors of the protracted domestic conflict in Ukraine. The only way to end it is consistent and faithful implementation of the Minsk Package of Measures that was unanimously approved by the UN Security Council. We support the activities of the OSCE mission in Ukraine and are ready to provide UN protection for its members. However, instead of fulfilling the Minsk agreements and engaging in dialogue with Donetsk and Lugansk, Kiev still entertains the illusion of introducing an occupying force in Donbass, with the support from the West, and increasingly threatens its opponents with scenarios based on force. The patrons of the current Ukrainian authorities should compel them to think straight and end the blockade of Donbass and discrimination against national minorities throughout Ukraine.

In Kosovo, the international military presence under UN Security Council mandate is morphing into a US base. Kosovo armed forces are being created, while agreements reached by Belgrade and Pristina with EU mediation are being disregarded. Russia calls on the sides to engage in dialogue in accordance with UNSC Resolution 1244 and will support any solution which is acceptable to Serbia.

In general, we are against turning the Balkans once again into an arena of confrontation or anyone claiming it as a foothold, against forcing the people of the Balkan nations to make a false choice or creating new dividing lines in the region.

An equal and undivided security architecture also needs to be created in other parts of the world, including the Asia Pacific Region. We welcome the positive developments around the Korean Peninsula, which are following the logic of the Russian-Chinese roadmap. It is important to encourage the process with further steps by both sides toward a middle ground and incentivise the practical realisation of important agreements between Pyongyang and Seoul through the Security Council. We will keep working to put in place a multilateral process as soon as possible, so that we can build a durable mechanism of peace and security in Northeast Asia.

Denuclearisation of the Korean Peninsula is among the challenges facing the world community in the key area of international security – the non-proliferation of weapons of mass destruction. Unfortunately, serious obstacles continue to pile up on that road. Lack of progress in ratifying the Comprehensive Test Ban Treaty and in establishing a WMD-free zone in the Middle East has been compounded by the unilateral US withdrawal from the JCPOA in violation of Resolution 2231, despite the fact that Iran is fully in compliance. We will do everything to preserve the UNSC-approved deal.

The Organisation for the Prohibition of Chemical Weapons is being pushed in an increasingly negative direction as the West attempts to turn its Technical Secretariat into a tool for punishing undesirable governments. This threatens to undermine the independent professional status of that organisation and the universal nature of the CWC, as well as the exclusive prerogative of the UN Security Council.

These and other issues related to non-proliferation were discussed in detail at the September 26 Security Council meeting, convened by the US chair not a moment too soon.

We are convinced that any problems and concerns in international affairs should be addressed through substantive dialogue. If there are questions or criticisms, what is needed is to sit down and talk, produce facts, listen to opposing arguments, and seek to find a balance of interests. 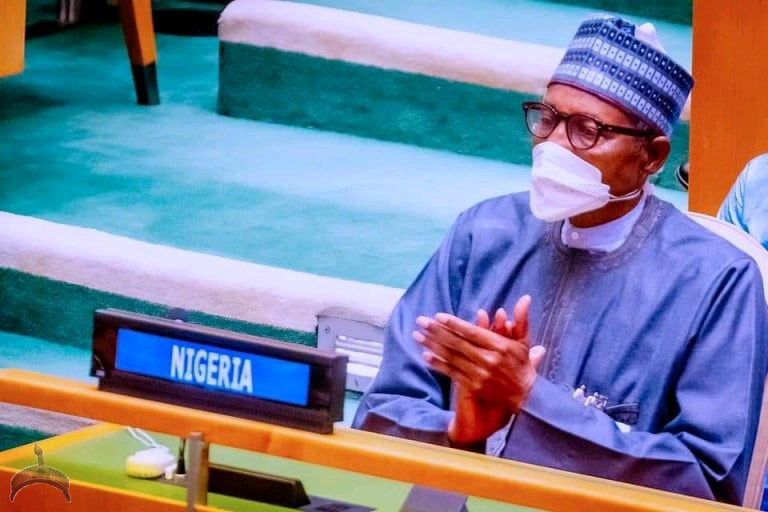 President Muhammadu Buhari’s Speech at the General Debate of the 76th Session of United Nations General Assembly Friday, September 24, in New York, USAProtocols:Mr. President,Let me, on behalf of the government and people of Nigeria, congratulate you on your well-deserved election as President of the 76th Session of the United Nations General Assembly. I would like to assure you of the full support and cooperation of the Nigerian delegation throughout your tenure. I would like to commend your predecessor, His ...