Don't Miss
Home / News From Nigeria / Breaking News / Why did Russia deploy so many forces against NATO? 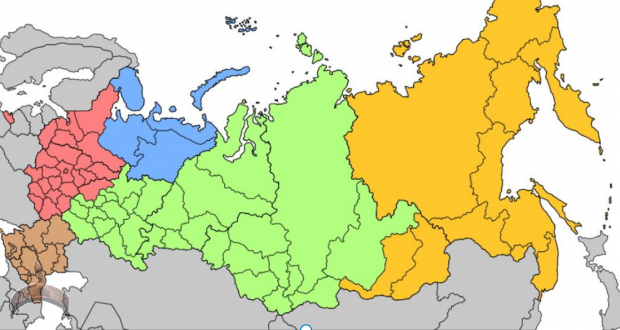 Posted by: BalogunAdesina in Breaking News, World News Comments Off on Why did Russia deploy so many forces against NATO?

So those evil vodka-soaked Russians are deploying their forces right near the Ukrainian border and are about to attack.  Right?

Well, today I want to begin by sharing a few very basic maps with you.  First, here is a map of Russia with her military districts:

The most important thing to understand is that the city of Moscow is located in the middle of the Western Military District which, in other words, means that Moscow is located on in frontier/border/boundary (приграничный) MD.

During the Cold War, the Ukraine used to be considered a 2nd strategic echelon territory (see here for a detailed discussion of how the Soviet forces were structured) and Moscow was far away from any conceivable frontline.

Nowadays, the entire Ukraine is de facto NATO controlled territory.  In other words, the capital of Russia is located less than 300 miles from the Russian border with the Ukraine (see map)

Here is another very revealing factoid: during the 90s, Russia did not have a single division-size fully manned unit deployed west of Moscow.  Now Russia has fully reactivated her famous 1st Guards Tank Army as the strategic reserve for the Western Military District.

What do you think brought about this rather dramatic change?

Might that not have something to do with the fact that NATO forces are now within the driving distance (on a tank, nor car) to Moscow’s suburbs?

And I won’t even go into the distances between the NATO forces in the 3B and Saint Petersburg (less than 100 miles).

The truth is that the Empire has been preparing a war against Russia since at least the mid 90s and that these preparations dramatically accelerated in the past seven years.

Which makes me wonder, what did the leaders of the Empire expect the Russians to do? Move all their forces back into the Central Military District so as to not frighten the 3B+PU?  Seriously?

The truth of the matter is much simpler: in case of war, the three western military districts (Northern, Western and Southern) would all three find themselves in the first strategic echelon.

BTW – the Northern Military District has now been augmented with the Northern Fleet Joint Strategic Command (Объединённое стратегическое командование Северный флот) with a status equal to a military district which could haev been called “Arctic Military District”). Its official designation now is “joint strategic territorial formation of the Russian Armed Forces performing the task of a military district“.  Its forces would also play a key role in northern Europe and the northern Atlantic.

In case of war, Russian military districts become “fronts”, that is “unified commands of operational and strategic troops (forces) of the armed forces in the continental theater of operations” which is militaryspeak for an independent military force capable of waging a full-scale combined arms war.  Please keep in mind that these fronts would also have, when needed, the support of rear military districts and units/forces of the strategic reserve.

So what does all this mean?

It means that while western politicians spent the past 30 years or so slowly encircling Russia, Russian force planners successfully reformed the Soviet/Russian armed forces (which were in a terrible shape in the 90s and in a very uneven shape during most of the 80s) into a military capable of taking on all of NATO at once and quickly and very painfully defeat it.

Remember all those super-dooper weapons Putin mentioned in 2018 which were initially dismissed as “bad cartoons” by western “specialists” and which are now mostly deployed?  You cannot understand their real role and significance unless you also take into account the reform (I would even say redesign) of the Russian armed forces in the last decade or so.  If you want a quick refresher on this topic, please see this analysis I wrote in 2016, that is two years BEFORE Putin unveiled the new Russian weapons systems!

Here is the key element to remember when considering what could happen next: should it come to a real, full-scale, shooting war between Russia and the West, ALL of these weapons systems and forces will be available to the Kremlin and most of them probably will be used in the very early phases of this war.  And I am not only taking about Iskander missiles or Bastion/Bal coastal defenses, I am also talking about the First Guards Tank Army which is such a powerful formation that there is literally no western equivalent to it.  Such heavy armored formation  have such the forces and means of destruction which would make it possible to carry out an operational breakthrough of the enemy’s front and while the same time reliably overcoming of the entire operational depth of enemy defense.  During WWII and the Cold War such formation were called “Shock Armies” (ударная армия).  If you look at the entire order of battle of NATO forces they simply don’t have anything even comparable to such a force.

And so, yes, of course, NATO commanders are frightened by what they see, this is true, and quite understandable.  What is not understandable is why these delusional idiots created the condition which left Russia no other choice than to be ready to fight a full scale war in Europe, including a nuclear one.

And what do they want the Kremlin to do now?  To dismantle these forces or send them back behind the Urals maybe?

I will simply end here with a few questions which don’t seem to bother the western “specialists” (LOL!) very much:

PS: Russian Defense Minister Shoigu just reported that in November the USAF used 10 strategic bombers coming in from both the east and the west to rehearse nuclear strikes on Russia and that they changed course only 20km from the Russian airspace.

PPS: also please make sure to check Andrei Martyanov’s analysis today (and check him on a daily basis!)