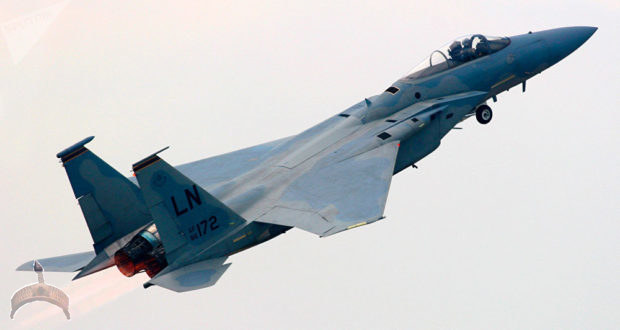 US F-15 Shoots Down Pro-Syrian Gov. Armed Drone Near al-Tanf

Posted by: BalogunAdesina in Breaking News, World News Comments Off on US F-15 Shoots Down Pro-Syrian Gov. Armed Drone Near al-Tanf

WASHINGTON (Sputnik) — A US F-15 fighter jet shot down an Iranian-made Shaheed-129 drone near Syria’s al-Tanf on Tuesday morning, after it was assessed that it posed a threat to the US-led coalition forces, Operation Inherent Resolve said in a statement.

The coalition noted the drone showed “hostile intent,” adding that the incident took place in the same location where another pro-Syrian government drone dropped munition on June 8 targeting the Syrian Democratic Forces.

The coalition also said that amid recent developments related to the deconfliction line with Russia, it will not allow pro-Syrian government aircraft to threaten or closely approach its forces.

“The coalition does not seek to fight Syrian regime, Russian, or pro-regime forces partnered with them, but will not hesitate to defend coalition or partner forces from any threat,” the statement added.

On June 18, a US jet shot down a Syrian Su-22 fighter-bomber near the city of Tabqa. The US-led coalition said the Syrian aircraft attacked Syrian Democratic Forces (SDF) positions, adding that the coalition downed the Syrian jet as part of “collective self-defense of Coalition partnered forces.”

The Russian Defense Ministry announced Monday that it suspended the deconfliction channel with the United States for incident prevention in Syria following the attack.

Additionally, the Russian Defense Ministry announced that any airborne objects west of the Euphrates River would be tracked by Russian ground and air defenses as targets.