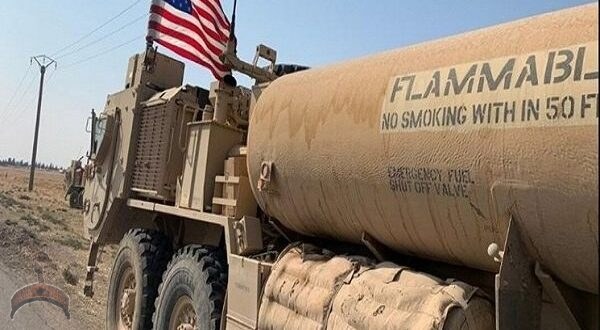 Posted by: BalogunAdesina in World News Comments Off on US troops smuggle 70 oil tankers out of Syria

US occupation forces have reportedly continued looting Syrian oil from the northern Al-Jazeera region of Syria’s Hasakah governate, as a US-military convoy of around 70 oil tankers made their way towards Iraq through the illegal Al-Waleed border crossing on 14 May.

According to local sources in the Al-Yarubiyah countryside, the convoy was accompanied by an additional 15 trucks carrying military equipment bound for Iraq, as well as six armored vehicles.

This comes just one day after 46 US vehicles were reportedly transferred out of Syria through the same border crossing.

US troops and their proxy in northern Syria, the Syrian Democratic Forces (SDF), are in control of most of the oil fields in Hasakah and Deir Ezzor and have been regularly smuggling Syrian oil out of the country to sell it abroad.

Dozens of similar US convoys have been reported over the last year and a half. On 18 December 2021, nearly one hundred oil tankers were smuggled into northern Iraq through the same illegal crossing.

In August 2020, a US company, Delta Crescent Energy, signed a deal with the armed groups to develop oil wells and a refinery in areas under the US occupation.

Damascus reacted angrily to this move and accused the US of engaging in “state piracy.”

On 10 January, Syrian media reported that the US occupation and one of its various armed groups, set up a refinery to process stolen oil in the town of Rmelan in Hasakah governorate.

According to the report, the installed oil facility has a capacity to refine 3,000 barrels of oil per day.  The refinery was set up in order to increase the looting of Syrian oil by the US occupation.

The US occupation has smuggled tens of thousands of barrels of Syrian oil into Iraq.