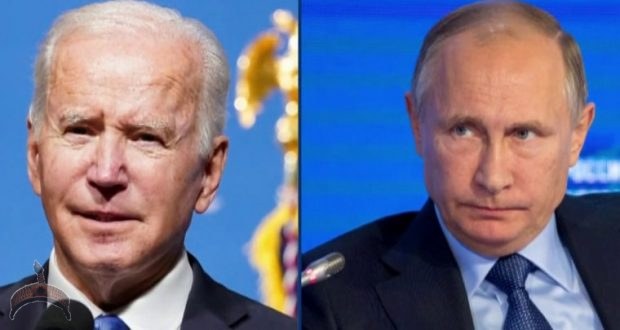 Why Did Biden Call Putin?

Posted by: BalogunAdesina in World News Comments Off on Why Did Biden Call Putin?

Simple: to make sure that in case false flag happens (which is most likely) the US assets and “decision-making centers” are not annihilated. But that is not how it is going to work. While Biden declares:

According to a White House readout of the call, Biden warned Putin that the US and its allies would “respond decisively and impose swift and severe costs on Russia” in the event of an invasion, and that such military action would “diminish Russia’s standing” internationally. Biden, who has thus far ruled out sending US troops to Ukraine, said that should diplomacy fail, America is “equally prepared for other scenarios.”

Both sides know that militarily the US (and NATO) are impotent and Russia’s strategic ambivalence is what drives Washington crazy. After all, Russia may decide to go all in, but in this case it is not going to be 404 only. Who said that Baltic States can not be “included” in the package? There are so many possibilities. As RT reports further:

Should Russia take military action, US Secretary of State Antony Blinken warned his Russian counterpart Sergey Lavrov on Saturday of a “resolute, massive and united trans-Atlantic response.” However, President Biden has thus far ruled out sending US troops to Ukraine, choosing instead to send thousands to Poland and Romania instead. Before speaking to Biden, Putin spoke to French President Emmanuel Macron by phone for nearly two hours. French officials told AFP that Putin wants an independent Ukraine that would remain out of the NATO alliance, something Western leaders have ruled out. Moscow has long insisted that NATO arms on its border would constitute an unacceptable security risk.

I am on record, Russia is not afraid of “sanctions” and there could be no any military response by NATO because the only response the US can offer militarily is a nuclear one, but even the most ludicrous hawks in D.C. want to live, with the exception of a dozen or two  of total fanatics in US Admin and Congress. My guess will be, since, as I am also in record ad nauseam, US “strategists” (Council on Foreign Relations, Atlantic Council, AEI etc.) are one trick ponies, they developed a “strategy” (or, rather, strategery) which, as is always the case with cowardly bullies, was designed based on a faulty “understanding” of conflict and lack of knowledge of Russia, and the hope was for an initial bullying effect on Russia. They couldn’t calculate consequences because they do not have situational awareness. Russia responded in kind and continues to show a very big stick protruding from behind Russia’s back. And now, the US is cornered and is in panic mode, because Russia’s military exercises are a very good demonstrator of a military capability which IS excessive for hypothetical “invasion” of 404 but also sufficient to achieve much larger objectives. And Washington doesn’t know what those objectives may be. They panic now, because they have no idea. Staying in the dark is extremely unpleasant.

Milley’s called Gerasimov yesterday for a reason. Russia has enough forces to smash NATO in Eastern Europe without much effort. Here is just one example:

MOSCOW, February 12. /TASS/. Russia has handed a note to US military attache in connection with the US nuclear-powered submarine’s incident in Russia’s waters near the Kuril Islands, the Defense Ministry said on Saturday. “On February 12, a representative of the office of the military attache for defense issues at the US Embassy in Moscow has been handed over a note at the Main Directorate of the International Military Cooperation of Russia’s Defense Ministry in connection with the violation of Russia’s state border by the US Navy’s submarine,” the statement said.

Submarines in the exercise areas are nothing new, Russia, US, UK do this all the time, what is new is that this one was detected and tracked within Russia’s territorial waters.

According to the ministry, a Virginia-class submarine belonging to the US Navy was detected on February 12, 2022 at 10.40 (Moscow Time) in the area of the Pacific Fleet’s drills near Iturup Island of the Kuril Islands. Under the guiding documents on protection of the Russian state border in the underwater environment, the crew of the Pacific Fleet’s frigate Marshal Shaposhnikov used appropriate means. The US submarine started a self-propelled simulator to split the target image on radar and acoustic control means into two parts and retreated from Russian territorial waters at a maximum speed, the ministry said.

And this very public move by Russia was also done for a reason–to demonstrate that there are enough forces to deal with any threat. Russia plans to start the exercises of a nuclear triad pretty soon too (in Russian). So, a lot of firepower on display. Scary, eh?

Previous: Nigeria Among Top 2 In The World For Bitcoin Searches On Google.
Next: Dating Girls In Their 20s Vs 30years – My Experience.