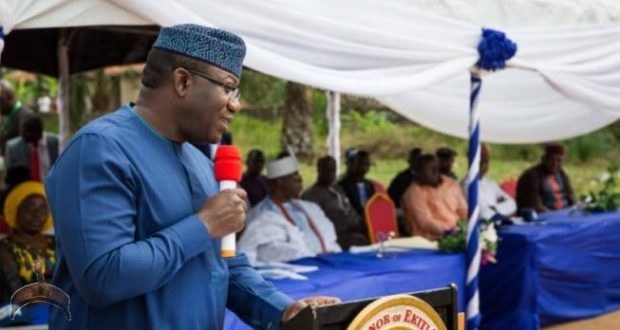 Posted by: Lolade in Politics Comments Off on ‘Amotekun’ Is Not Regional Police, Says Fayemi

Speaking at the launch of the outfit in Ibadan, Oyo state on Thursday, Fayemi said the initiative was put together by governors of the south-west to tackle issues of insecurity and allay the fears of the people
He added that the death of Funke Olakunrin, daughter of Reuben Fasoranti, a leader of Afenifere, put further pressure on the governors of the region to take measures ton put an end to the insecurity in the south-west.

He said the governors would go any length to ensure their people sleep with both eyes closed.

Fayemi dismissed reports that some of the governors had “developed cold feet” over the launch for fear of being seen as antagonistic to the federal government.

Fayemi said they have no intention of undermining the integrity of the government.

He added that though some of them are advocates of state police, the criteria to establish one has not been met.

“Amotekun is not a replacement nor an imitation of the Nigerian Police force, It is a complement that gives our people confidence that they are being looked after by those they have elected into office. We do not want this to create any fears in the mind of anyone.

“We are not creating regional police force neither are we oblivious of the steps we must take in order to have state police.

“Yes, some of us are unapologetic invertebrate advocate of state police but we are also law-abiding citizens of Nigeria. We know the process and procedures we need to undergo in order to get to that point. We know we need a constitutional amendment and we are not there yet.

“That would not stop us from continuing to campaign for a policing arrangement that is close to our people in their various communities.

“We do not want anyone to misconstrue what is happening here. The conception of Amotekun is that we would operate on a state by state basis.

“This is not an agenda to undermine the integrity of the federal republic of Nigeria. There is no conflict, our primary interest is the security and safety of our people.”

Previous: ‘There is a need for a change of that name NIGGA AREA (NIGERIA ie area of darkness)’, Dr Says
Next: #Amotekun: Thank God FG Is Not Averse To Community Policing ― Ooni