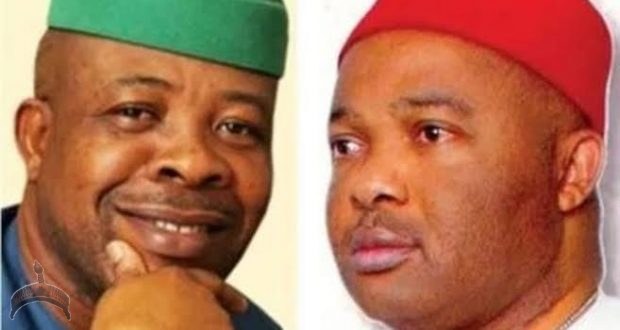 Posted by: chucks in Politics Comments Off on Imo: 10 Quotes From Supreme Court’s Dissenting Judgement

The Supreme Court had on Tuesday dismissed the application seeking a review of the January 14 judgement of the court which removed former governor of Imo State, Emeka Ihedioha and declared Hope Uzodinma winner of the election. But in a dissenting judgement of the court by Justice Chima Nweze, the apex court set aside the judgement of January 14 and directed the Independent National Electoral Commission (INEC) to issue Ihedioha with the certificate of return.

Here are 10 excerpts in that judgement:

One, “With profound respect, in the totality of all their submissions, the appellant respondents misunderstood the applicant’s point. Little wonder then that they did not offer any defence in the main argument of the applicants.”

Two, “In a nutshell, the applicants’ case was woven around their contention that the said judgement of this court was null and void since it was made without jurisdiction. Hence, time does not run against them in relation to the null judgement.”

Three, “This court is like other apex courts in other parts of the Commonwealth. Four, “In the judgement of this court, this jurisdiction of court was not specifically dealt with. Hence, the judgement of Adah J.CA. is still a subsisting judgement. Five, “The applicants equally complained that the said judgement of this court is a nullity in that it was delivered without jurisdiction. True indeed, one of the grounds of the first appellants (Uzodinma)’s reliefs was that the election was invalid by reason of non-compliance with the provisions of the Electoral Act (as amended). It was therefore, with profound respect, clearly preposterous to award him electoral victory in exercise he has deprecated and maligned as being invalid.”

Six, “Although the first appellant claimed that his 213, 695 votes were unlawfully excluded in the third respondent’s final result, the statement of his excluded votes in Exhibit AGA339527, the one on record, mysteriously omitted any reference to the votes scored by other candidates in that election. In my respectful view, having thus failed, neglected or omitted to plead the scores of other candidates in the said election, this court wrongly declared him as duly elected.”

Seven, “True indeed, DW 5, in his INEC form EC40G, Exhibit 63 RB1, 63 RB19 shows that elections in those polling units were either cancelled or did not hold at all. Unfortunate for defence was that the said first appellant misled this court into accepting those duplicitous and fake results which he had tabulated as shown above that was how 213, 695 votes were added to him and 1, 903 votes were added to the first applicant. The net effect was that although by Exhibit A1 Form EC8, Exhibit AGA2 in the affidavit in support of the application, the total number of accredited voters in the state was 823,743, the total number of votes cast came 961, 083. Wonders shall never end! That means there were 159,340 votes in excess of the total number of accredited votes. “In the circumstance, I think that the humble view, that this court has inherent jurisdiction of redeeming its image by setting aside the said judgement, is not out of place.”

Eight, “Even then, this court declared the first appellant the winner in the said election when there was no evidence that he satisfied the true requirement of highest number of votes cast in the election and a position of not less than one-quarter of all the votes cast in each of at least two-thirds of all the local government areas in the State, Section 179 (2) (a) and (b) of the Constitution. If left, the said judgement of the Supreme Court will continue to haunt our electoral jurisprudence now and in the future.”

Ten, “Instead of indemnifying the learned senior counsel for the applicant in court, I commend his boldness and courage in approaching this court with this type of motion.” Related

The Executive Secretary of National Land Development Authority (NALDA ) , Mr Paul Ikonne says the establishment of 109 Integrated Farm Estate by the Federal Government has nothing to do with Ruga or ranches. The News Agency of Nigeria ( NAN ) reports that President Muhammadu Buhari had directed NALDA to establish integrated farm estates in all the 109 senatorial districts to boost food production across the country. Pan-yoruba socio -political organisation, Afenifere, had in a statement by its spokesman, ...