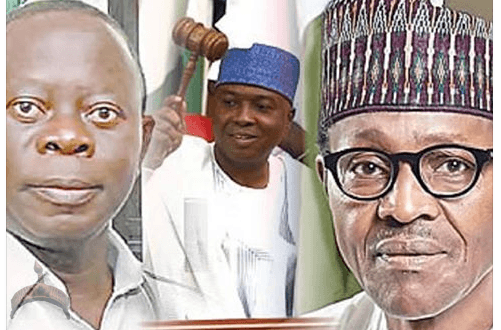 Posted by: Lolade in Breaking News, Politics Comments Off on President Buhari sends letter to Senate seeking approval for a $75 million for Edo State

The Senate, on Tuesday, got a letter from President Muhammadu Buhari looking for approval for a $75 million dollar loan from the World Bank for Edo State. The letter, read by President of the Senate, Bukola Saraki, expressed that advance was the second tranche of an aggregate of $225 million officially approved by the bank.

It stated that the first tranche of $75 million was affirmed by the seventh Senate in 2012. In the letter, the president clarified that the fund was for Development Policy Operation (DPO), an undertaking intended to be competed in three tranches in the state.

He said that reports from the state showed that the system was at that point yielding results as far as private sector investment, increased revenue and business opportunities.

Previous: Quote Of The Day !
Next: Careless: President Buhari Can Make All His Appointments From One Village – Prof. Utomi

Senate Deletes NYSC From The Constitution, Others (Pics)

This Is The Complete Collation Of The Votes Of The Senate Of The NASS As Shared By Delta Central Senator Sen. Ovie Omo Agege…This Was Shared By The Senator Himself Today.26/07/2017 No. 29 is Subject To Your Interpretation