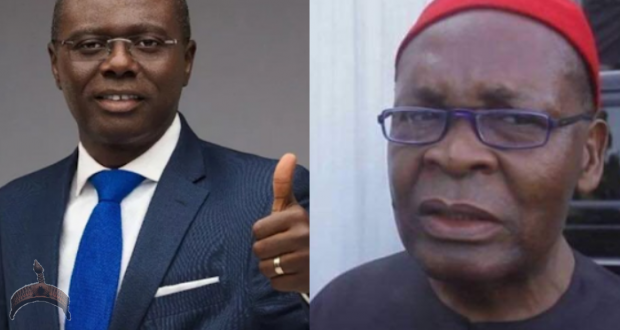 Posted by: Lolade in Politics Comments Off on Sanwo-Olu Appoints Joe Igbokwe Special Adviser On Drainage

Governor Sanwo-Olu had nominated Mr Igbokwe as Commissioner in the list sent to the Lagos State House of Assembly, last week.

Igbere TV reports that the Assembly had confirmed 35 out of the 38 nominees, with Igbokwe among those confirmed as Commissioner designate.

Many had expected that the Governor would announce Igbokwe as Commissioner during today’s swearing in at the Alausa Government House, Ikeja, Lagos.

But shockingly, the APC Spokesman was unveiled as Special Adviser, as against the earlier announced Commissioner designate.

Joe Igbokwe had sparked controversy online over his “I am not Igbo…” comment during the screening exercise before the Lagos State House of Assembly.

The controversial APC Spokesman had come under fire, recently, over a mockery comment on popular Lagos motorbike hailing service, GoKada.

Igbokwe had mocked GoKada operators for shutting down operations in Lagos to rebrand and restrategize.

“Instead of partnering with govt on BRT, you invested “5.3 million dollars” in Okada business and expect that Lagos state will allow you jeopardise its muliti-billion naira mass transit investments.

“Call it ‘bike-hailing start up’ or whatever, okada na okada… it is not sustainable in a city of high density population Lagos”, Igbokwe had said.

The comment, however, did not go down well with many Nigerians lambasting Igbokwe and reporting him to Governor Sanwo-Olu.

Many Nigerians have reacted to the latest development, with many mocking the APC Spokesman for being “dumped” by the government despite his “overzealousness” and “eye-service”.