What’s the meaning of Sai Buhari?

Posted by: Lolade in Breaking News, News From Nigeria, Politics Comments Off on What’s the meaning of Sai Buhari?

By Amah Jones
Sai Buhari is a highly-charged emotive language adopted by APC supporters in adulation of their Janjaweed lord and savior, former dictator, Gen. Muhammadu Buhari. His worshipful followers hope to make the slogan gain traction by screaming it into our ears at every drop of the hat, but it’s not working. The slogan itself appears to have further amplified their blindness to the glaring realities of Nigeria’s emerging economic and political situations.

Our economy has grown much bigger and democracy keeps flourishing under President Jonathan’s watch. Nigerians, including Buhari himself, have enjoyed far more freedom than they ever thought possible. Freedom, including that of speech, is something they never knew under the dark, miserable days of Gen. Buhari’s brutal military dictatorship. It’s ironic that Buhari himself has taken unbridled advantage of the free speech provisions enshrined in our Constitution to repeatedly make incendiary remarks that if anyone had uttered under his rule, would most certainly have resulted in an arrest, imprisonment, and worse still, a summary execution—-with or without trial.

Gen. Buhari lacked political vision as a dictator just as the “Sai Buhari” slogan is now blinding his followers from acknowledging, with fairness and truth, the good work President Goodluck Jonathan has done as he charges, straight ahead, with his lofty goals of building a better and more prosperous Nigeria. Nigeria under Jonathan’s watch, has surpassed South Africa as Africa’s largest, strongest economy. His administration’s success irritates the opposition and therein lies the root of their frustration.
In truth, “Sai Buhari” really stands for their messiah’s troubling legacy of mediocrity, ineptitude, bad governance, sectionalism, religious intolerance, backwardness, support for Islamic violence, Islamization Projects, ethnic cleansing policies, political persecution of southerners, the persecution of Christians and other non-Muslims, Boko Haram sponsorship, and undying threats of goading “dogs and baboons to soak in blood” after failing at the polls.

Sai Buhari stands for LOW MENTALITY!
Folks, “Sai Buhari” shall, along with the electoral prospects of the Janjaweed APC’s messiah, go down in flames. – Amah Jones

Previous: Patience Jonathan went out for drink with some of the Top Women..
Next: Federal gov. Targets 20m Tonnes of Domestic Food Production by 2015 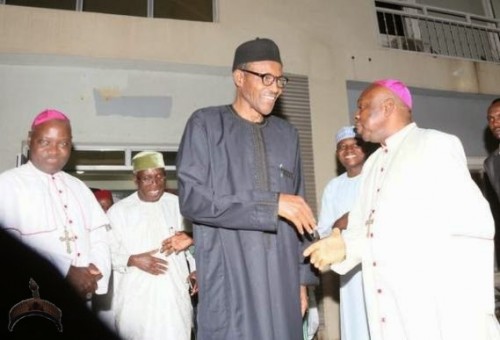