Don't Miss
Home / News From Nigeria / Breaking News / Èsù Is Not Satan But A Provider Of Wealth – More functions of the Deity. #EsuIsNotSatan 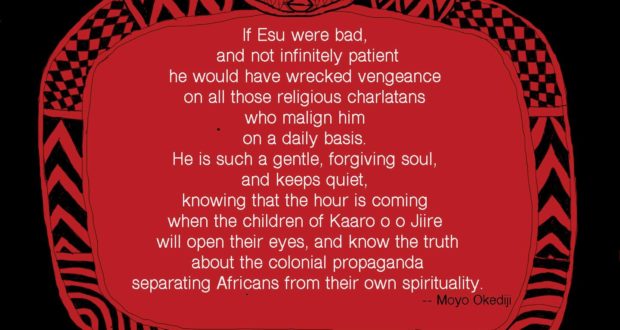 Èsù Is Not Satan But A Provider Of Wealth – More functions of the Deity. #EsuIsNotSatan

Posted by: ayangalu in Breaking News, Culture Comments Off on Èsù Is Not Satan But A Provider Of Wealth – More functions of the Deity. #EsuIsNotSatan

Good morning my people, hope you had a splendid day, I pray as we are going out this morning that èṣù ọ̀dàrà will provide for us Àse.

Let us have a brief lecture about èṣù ọ̀dàrà. Èṣù is one of the greatest irúnmọlè (deity) that came from heaven to the earth. Èṣù ọ̀dàrà is a very powerful irúnmọlè that has great authority. He can do anything at his convenience time. He is master of Justice but the blind colonial religious mischievous was the one misinterpreted èṣù ọ̀dàrà as Satan. Èṣù ọ̀dàrà didn’t exist in Biblical history but Satan does. Èṣù òdàrà is our precious deity that carried out his assignment as he was directed by Olodumare.

ESU – the Holy Saviour and the Messiah Of the Universe. (see more functions of esu)

Èṣù will treat you as you treated him, there is no partiality for him. If you treat him well he will also treat you well.

Let us hear what the holy corpus of ọlọgbọn meji said about one of the roles of èsù ọ̀dàrà.
Hear what the Corpus said:
Omi kúnkúnkún Omi fa Ọkọ ọya ya
Okun ko tie mi lẹ̀gbẹ̀lẹ̀gbẹ̀ síhìín
Okun ko tie mi lẹ̀gbẹ̀lẹ̀gbẹ̀ sọ́hùún
Bi orogun ẹni bani ina sile tiyawo re ki jo it cast divined for Ọ̀rúnmìlà when father was going to borrow money from Lábúpẹ̀ẹ́, he was advised to appease èṣù ọ̀dàrà with, (two kola nuts…… and three he-goats) and he complied, aftermath Lábúpẹ̀ẹ́ provided for plenty treasures for Ọ̀rúnmìlà and he became greatly rich he started dancing and rejoicing praising priest the priests were praising Ifá while Ifá was praising Eledumare.
Ọ̀rúnmìlà started singing the song of ifa that;
Who is the owner of the money we are spending on the earth?
Èṣù ọ̀dàrà
It is the one that owns the money we are spending on the earth,
Èsù òdàrà!.
My people, I pray this morning that may èṣù ọ̀dàrà direct us to the path of success and prosperity today, may he never block the path of our goodness, may we swim in the pool of wealth today and forevermore àṣẹ.

Tagged with: Esu Esu is Not satan