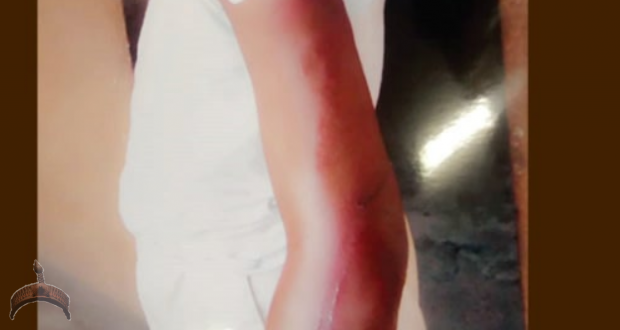 Lagos Teacher Breaks Pupil’s Arm While Flogging Him Over Test

Posted by: LolaJQDybu in Metro life Comments Off on Lagos Teacher Breaks Pupil’s Arm While Flogging Him Over Test

A teacher at CMS Grammar School, Bariga, Lagos, Mr Ikena Ekwenam, has been arrested by the police for inflicting injuries on his 10-year-old pupil, David Uwakwe.

Ekwenam, who teaches Agricultural Science at the school, beat up the Junior Secondary School 2 pupil for allegedly failing to come early for a make-up test.

Sunday PUNCH learnt that the teacher on Friday, November 22, went to Uwakwe’s class and told him he could not find his script on the continuous assessment earlier conducted, asking him to come for a make-up.

It was gathered that the week was slated for revisions and Uwakwe could not go for the test at Ekwenam’s office until much later in the day when the teacher was not around.

Angry that the boy did not show up on time, the teacher reportedly went to his class and gave him several strokes of cane, causing a dislocation to his arm in the process.

His mother, Adejoke, told our correspondent that she was shocked to find marks of beating on her son’s body when she went to pick him up after the closing time.

She said, “As I got to the school that afternoon, some of his classmates ran to me and said their Agric teacher beat David (Uwakwe) and he sustained injuries. I met my child in front of the school clinic which was already closed and took him to the Vice Principal Administration.

“The VP directed the clinic officials to give him anti-tetanus injection and antibiotics because there were bruises all over his body and he was bleeding. I took him to the principal who pleaded with me. I left the school with my child and called my brother-in-law because my husband was not around. I told him what happened.

“Before he met us at where we were, my son’s hand had swollen. I went back to the school with my brother-in-law and the principal was angry with us. I told the principal that one of the teachers must follow us to the hospital and one Mr Mayowa was assigned to follow us to the National Orthopaedic Hospital, Igbobi. It was discovered at the hospital that the boy had a dislocation in the arm region.

“People at the hospital wondered if he had an accident because there were marks of cane on his two hands and buttocks. They were annoyed. The doctor treated him and put POP (Plaster of Paris) in his hand. He was discharged the following day.”

Adejoke said the boy had an accident in December last year and suffered a fracture to his right thigh, forcing him to undergo a surgery.

She stated that he stopped using crutches some weeks ago, adding that she was pained that the school did not take the case seriously.

She said she consequently petitioned the Domestic and Sexual Violence Response Team of the Lagos State Ministry of Justice.

The woman stated, “They did a test in school and he participated. The teacher misplaced his script and told him to come for a makeup. The boy said they were in the revision week and that teachers were coming one after the other into their class to teach them. It was in the afternoon that he went to see the teacher and he didn’t meet him in the office. The man then came to his class; took him out and flogged him angrily. I was told that his class teacher did not intervene.

A source at the DSVRT said a team visited the school after receiving the petition and interacted with the parties involved, including pupils who witnessed the incident.

The source said, “In line with the Lagos State Government policy of zero tolerance to child abuse in schools and to protect children, our office embarked on a joint visit with the office of the Education Quality Assurance, Lagos State Ministry of Education, Alausa to CMS Grammar School, Bariga on November 27, 2019 where the incident occurred.

“We engaged the principal, the survivor, the perpetrator, the class teacher and few other pupils who witnessed the incident. The affected child stated that he was physically abused by his Agricultural Science teacher, Mr Ikenna Ekwenam. He alleged that his teacher beat him because of his incomplete Agric Science note and his missing test script.

“He further explained that before the teacher started beating him, his classmates told the teacher that he just had a surgery which he was still recovering from, but the teacher went ahead beating him till he sustained several injuries including a fractured bone.

Our correspondent learnt that the case was referred to the Gender Unit of the Lagos State Police Command in Ikeja and Ekwenam was arrested.

The DSVRT Coordinator, Lola Vivour-Adeniyi, confirmed the incident to our correspondent, adding that the agency would continue to ensure that rights of children were protected.

“We use this medium to reiterate the state government’s zero tolerance to all forms of violence against children and we will ensure that the rights of children are adequately safeguarded and protected,” she said.

The spokesperson for the police in the state, DSP Bala Elkana, said investigation was ongoing on the case.

Reacting to the incident, the school principal, Rev. Olubusola Sokefun, in a letter sent to our correspondent said he queried Ekwenam upon receiving the report of the assault and a panel was set up to look into the matter.

He explained that the management collectively appealed to Adejoke, adding that the teacher had been suspended indefinitely.

The letter read in part, “Thereafter, I called Mrs Adejoke Uwakwe to apologise and that the cost of hospital bill would be borne by the teacher. Immediately after the assembly on Monday, November 25, 2019, the two vice principals and I received Mrs Adejoke Uwakwe in company with Mr Peter Uwakwe (the pupil’s uncle) and a lady and they asked me to produce the teacher.

“I said it would be unprofessional to produce a member of my staff in a situation like this and I appealed to them. My appeal fell on deaf ears and they insisted that I should produce the teacher else they would scatter the whole school.

“They threatened that when they came back, I would be forced to produce the teacher. Then I called the Executive Secretary of Lagos Anglican Schools Management Board, Ven. Victor Olusa, to brief him about the situation.”

Sokefun stated that he also informed the Chairman, Board of Governors of the school, Justice Faji, and Old Grammarians Society President, Mr Olu Vincent, about the incident.

The principal said he, the two VPs, Vincent, the senior boarding house master and two other teachers went to Adejoke’s residence on Akerele Street, Oworonshoki and met with her elder sister, Mrs Abosede Edward, “who was very hostile to the school delegates, rained insults and curses upon the school and the teachers,” adding they were prevented from entering her apartment.

“In our bid for peace and reconciliation, the school sent emissaries to the husband’s village in the East. The Head of the school’s Quality Assurance, Dr Sofolahan, was brought in to assist in appealing to Mrs Uwakwe on the matter. She consequently sent a lawyer’s number (Mr Femi Odufowokan) on the need to quell the escalated incident.

“In furtherance of our efforts to have an amicable settlement, a name that appears familiar was worked on and was discovered to be Mrs Uwakwe’s family house and necessary contacts were made on the need to talk her out of the case at hand.”