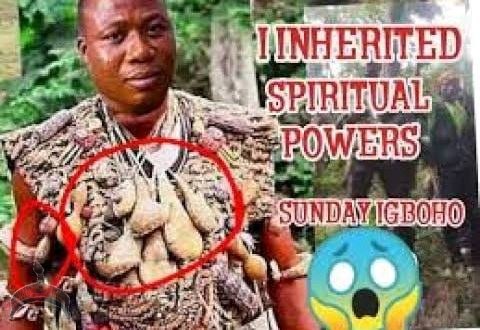 REVEALED: When Sunday Igboho Found Out They’re Here To Kill , He Entered A Room , And Disappeared ― Aide

One of the close aides of the Yoruba freedom fighter, Chief Sunday Adeyemo aka Sunday Igboho, Friday, narrated the scene at Igboho’s Soka, Ibadan residence during the raid of the operatives of the Department of State Security, DSS, and army, describing it as a Commando operation.
He also disclosed how Sunday Igboho, sensing the mission of his assailants was to kill him, entered a room and disappeared.

While speaking with Vanguard, Igboho’s aide, who did not want his name in print, said the operation was like a movie scene in the early hours of Thursday, as operatives of the DSS and army descended on the building with a mission not known to the occupants.

According to him, the unexpected visitors, who dressed in army camouflage and military attire, entered into the compound to met their hosts unprepared.
He said the assailants came in five army branded Hilux vehicles and forcefully gained entry by killing one of the bodyguards of Igboho, named Adogan.

His words: “When they arrived at about 1:35 am on Thursday, they scaled the fence and opened fire. We just heard sporadic gunshots all around the main house during which they killed one of the bodyguards of Sunday Igboho named Adogan.

“Sensing the gunmen had gained entry, he (Igboho) himself engaged them in a shootout when he realised they had already killed some of his boys.
“Before the gunmen made their way into the inner rooms. There was a lady in a mask who led them in. She was calling occupants of the house by their names. That is to show that an insider gave them the information they relied on.
“The lady started shouting the names of close aides of Igboho, she asked them to kill every living thing sighted on the premises. They killed his Alfa while praying.
“They took away about N3m from his (Igboho’s) room as well as his jewelry. The assailants killed five persons and took away their corpses. Some ladies, who are wives of chief’s aides, were also taken away. They took away the CCTV box so that we won’t playback.
“While Igboho escaped, out of the hanger, they whisked away one of his wives and 13 other aides including one of his bloggers named Lady K.
“When Sunday Igboho found out they were there to kill him, he had to enter another room and disappeared. We can’t tell his whereabouts as I am speaking with you. The gun duel lasted an hour.”

Residents speak
Some residents who also spoke with Vanguard named Oyewole said Sunday Igboho’s house raid suggested that the DSS did not have a competent court order to arrest or declare him wanted. All that DSS was out to do was to kill him.
“What they were here was to kill him because of his agitation for the Yoruba nation.”
Another resident, Mr Akinpelu said there was no justification for his arrest, saying that it was an attempt to silence him like the IPOB leader Nnamdi Kanu.
Vanguard News

Previous: Igboho To FG: I’m Not Nigeria’s Problem … Don’t Intimidate Me For Ensuring Peace In South-west
Next: Sunday Igboho Says Arms ‘Recovered ’ By SSS Don’t Belong To Him