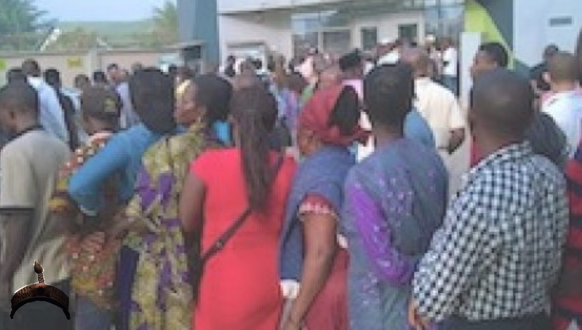 Posted by: Lolade in Breaking News, Metro life Comments Off on Un-harmed ROBBERY, WITHIN BANKING HALLS:

“Experience With an unarmed robber in a Banking Hall”

I have a neighbour who sells foodstuffs. She travelled for d new year & so instructed a relation to pay in the money(130,000) into her Diamond Bank Account…

She was in the Banking Hall, Warehouse Branch, Apapa, with the money in her bag. While filling her teller, someone asked her if she was paying in & at which she said yes. She later joined the long pay-in queue.

After a moment, and with d queue practically not moving, a young man, dressed in corporate suit (all thought was d Bank’s cashier) came close to her and in a low voice asked for people who were paying above 100,000.
About five people stepped out and he asked them to follow him a few meters away from d queue. They all thought he was d Bank’s staff, out to offer help.

He collected all their money, d completed tellers & asked them to wait on the line, so he can go in and stamp their tellers…..

And so d man left. They waited & waited endlessly, not knowing that he had long exited d Bank,through d rear exit,with their over #650,000.00.

It was after d seemingly unending wait they decided to report d matter to the Manager,who had to come down… checked the CCTV footage & behold, the gentleman in suit, was neither d Bank’s cashier nor even a staff !

The security guard confirmed it was the third time such was happening in that same Branch alone !

My fellow Nigerians, we must BEWARE of activities of fraudsters, particularly in d Banking Halls !!

We should pls share to avoid others falling victims.