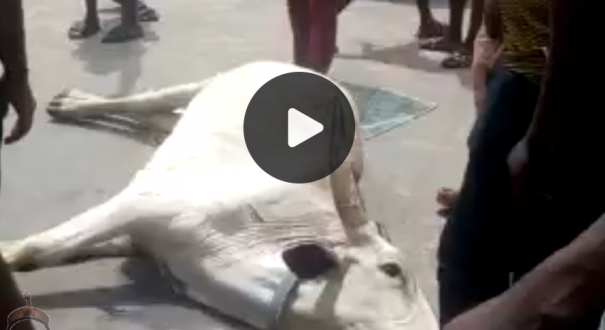 The Lagos State Police Command has arrested the driver and the conductor of a commercial bus linked with the death of a cow in the Agemowo, Badagry area of Lagos.

Two yet-to-be-identified cattle herders on Monday reportedly stabbed a man to death in protest against the killing of a cow around the area.

It was gathered that the herders were crossing the expressway with their cattle when a commercial bus crushed the cow to death.

Watch the video above.

Following the murder, the two herders were arrested by the police.

However, fresh updates reveal that the driver of the vehicle, his conductor, and the owner of the cow have also been arrested.

The Lagos State Police Public Relations Officer, Benjamin Hudenyin, confirmed that five persons were in police custody over the murder.

He said, “They are the driver of the vehicle, his conductor, two herders, and the owner of the cow.

“We are not targeting anybody. We need everybody’s input, including bystanders, so that we can recreate the scene and know what exactly happened and who exactly is at fault.

“At the end of the investigation, anyone found not culpable will be allowed to go.”