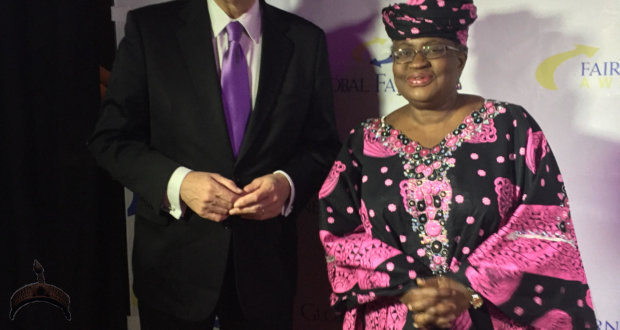 The award was presented to her by the Global Fairness Initiative in recognition of her contribution to sustainable development, through serving others, and her consistent focus on implementing development programs that benefit the poor and less privileged.

Speaking at the event in Washington DC, the former minister expressed gratitude for the recognition and pledged to continue to fight for fairness for the less privileged.

“I appreciate the Trustees of the Global Fairness Award for recognizing a lifetime devoted to development, including the privilege I have now of working for children’s immunization, through Gavi, and for managing climate risk in Africa through the African Risk Capacity.

Let 2017 be a year of continued fight for fairness for the most vulnerable among us, and those left behind in this world.”

Other recipients of the award include Dr Cristina Liamzon, a development consultant, and Ms Randi Weingarten, an American labor leader, attorney, and educator.

The Global Fairness Initiative is a not-for-profit international organization that promotes a more equitable, sustainable approach to economic development, ensuring that benefits and prosperity are extended to all people, including the working poor.

Some of the notable personalities that have been recognized and honored with the Global Fairness Award include Robert Bruce Zoellick, the eleventh president of the World Bank,

Previous: Man sentenced to death for ₦200 robbery and murder
Next: Nigeria Is Sinking Under Buhari – Soyinka

False audio of NOI in circulation

Few days back, previous Minister of Finance Dr. Ngozi Okonjo-Iweala alarmed people in general over a doctored sound recording of a lady professing to be her which has been circulating on the web. The previous minister portrayed the false sound as an endeavor to “deceive, lock horns as well sully her name” that has been flowing on the web. The following is an announcement discharged today by her Media Adviser: