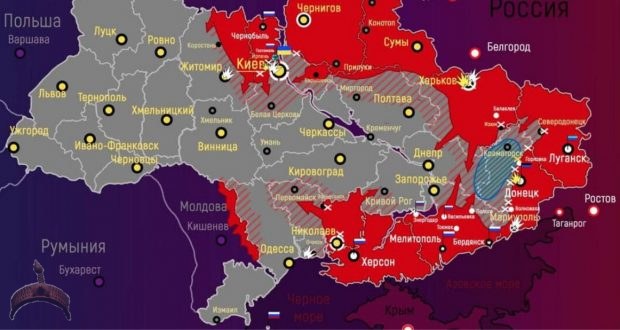 Day 10 of the Russian special operation in Ukraine

Posted by: BalogunAdesina in Breaking News, World News Comments Off on Day 10 of the Russian special operation in Ukraine

It’s day 10 of the Russian special operation and in this commentary I will try to sum up some of the most critical developments.  So here we go:

First, the now obligatory map of the situation as of yesterday evening:

I won’t comment much because either it is self-evident to you and my commentary is not needed, or this looks like an imminent Ukrainian victory over a “miscalculating Putin” to you, in which case no comments of mine are going to help either.  So no more comments about the map for right now 🙂

This is crucial: the Empire of Lies is lying, of course, but it also knows the true score.  Which means that now that the West has lost the war in the Ukraine it needs two things: as many dead (on all sides) as possible and to make the most political capital possible from this war, which means that not only must it last as long as possible, but it has to “deliver” the biggest number of deaths, maimed and injured.  Besides, that kind of stuff pushes all the correct “emotional buttons” and prevents the audience from using its analytical capabilities, however tiny these might be.

Any halfway competent military commander who would look at the map above would immediately see that the only rational decision at this point is for the Ukrainians to surrender: that map is really a no brainer.  But since orders come from Uncle Shmuel and since Uncle Shmuel hates Steppe Niggers no less than Snow Niggers, Uncle Shmuel will now aim its immense resources at prolonging that war as long as possible and with as many casualties as possible.

On a more personal note, I have to say that being a Russian in the West is outright painful.  I can only imagine what Jews must have felt in the 30s in Germany.  The worst part is not to see the herds of passive infantile TV watching idiots being idiots, the worst and most heartbreaking is to see people you love and respect being totally conned and fully accepting the western PSYOPs narrative.  In my case, it happened with close friends and even clergymen which really ought to know better (if you are Orthodox, then you are the spiritual heir to the Roman Empire, which means that you ought to know not only what Franks and Crusaders did in the past, but also realize the full continuity between them, the Franks and Crusaders of the past, and the modern Franks and Crusaders; apparently not all Orthodox Christians can connect these dots, what a shame, really!).  Anyway, these are lonely days for me and my family.  Then, in quick succession, I saw Roger Water’s interview for RT yesterday, following by the following Israeli headlines:

In this interview with RT, Roger remembered the day he asked his friend Etienne what gave him courage and Etienne replied “Roger, maybe I am not alone?”.

Well, Roger, if you read these lines, know that thanks to you, I feel that I am maybe not alone either.  You gave me courage all my life, and your voice consoled me in my darkest times, and here, again, you are with me.  Thank you Roger, I cannot put in words what that means to me!

Frankly, I was sure that the sheer size of the US PSYOP would affect Roger just as it affected even some of my Russian and Orthodox friends.  And Roger is an artist, a composer, a poet and a musician, but he sure ain’t not political science geek.  And he might not get every detail of what is happening (he is way too busy, for one thing), but his heart guided him and that goes to show that what the West lacks today is not brains, though these are totally missing too, but simply a kind heart?

The French author Rablais (15th century) once wrote “science sans conscience n’est que ruine de l’âme” which means “science without conscience is but the ruin of the soul“.

A fitting epitaph on the West’s grave if you ask me.

And also a warning to Russia not to follow the West’s shameful path into self-destruction: what would be the point of a military victory if Russia becomes just the latest iteration of a terminally westernized nation?  How could Russia save the Ukraine if she can’t even save herself spiritually?  Even the best military on the planet won’t save Russia if the souls and brains of young, and not so young, Russians are constantly polluted with materialism, lies, compromises with one’s honor and, above all, crass, ugly and vulgar materialism?

The Church of Christ cannot be a sycophantic servant of the secular state AND the conscience of a nation.  It is either one or the other.  God willing, the events in the Ukraine will affect Russia in a profound spiritual way, just the way the LDNR serves to remind Russia what she is called to be.  As a good priest friend told me yesterday, “Andrei, God can act even through the Sergianists“.  He is right, and that gave me courage at a time when I was feeling frankly desperate by the blindness of my fellow Orthodox Christians.

So yes, things in Russia are bad, especially spiritually, but I will not give up hope.  Maybe a new Patriarch like Saint Germogen or a new Metropolitan of Moscow like Saint Philip II, will be granted to the Russia nation if we all repent for our sins, compromises, cowardice, and lack of faith (see page 105 here)?  Yes, it does sound impossible today, especially when I look at “Patriarch Kirill” and his gang, but I chose to place my trust in the words of Christ Himself: “with men this is impossible; but with God all things are possible” (Matt 19:23-26).

My next update, unless something major happens, should be tomorrow.  First, I need to spend some time with my family and, second, by tomorrow late evening (Moscow time) things should be much clearer (not that the outcome is in any doubt, really).

Previous: Belgrade: Serbs head to The street in Support of Russia’s OP in Ukraine.
Next: Yemoja, Òrìsà of all waters