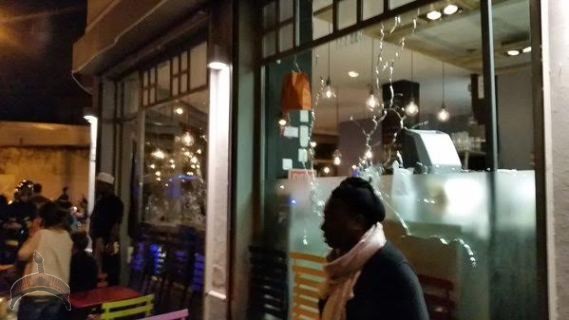 First footage of Paris attacks shows diners diving for cover as jihadist sprays café with bullets… and women he tried to kill at point blank range but who escaped because his gun jammed. The exclusive images show the merciless savagery of an Islamic State assassin (inset) and the extraordinary bravery and survival instincts of his intended victims. They also show the incredible luck of a young woman who would have died had the terrorist’s assault rifle not misfired as he held the weapon over her head, giving her a chance to run away. Police believe her to be the luckiest person to escape with their life during Friday’s psychopathic rampage which left 129 people dead and 99 critically injured. There is also remarkable footage of a 20 year old waitress who ducked under the bar and wrapped her arms around an older, injured woman as the Islamic State gunman who sprayed the restaurant and its outdoor dining area with bullets. The Daily Mail can today reveal the horrifying footage with second-by-second commentary.

Previous: Photos: Bank robbery reported at Agbara !
Next: Pres. Buhari, The Jagaban others at the wedding fatiha of Atiku’s daughters 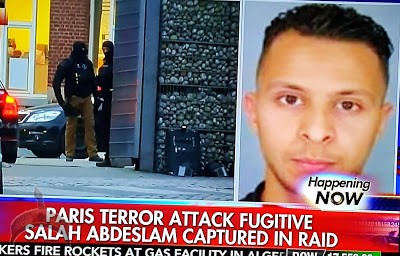 The most wanted criminal from last November’s Paris assaults has been caught in a Brussels shootout, Belgian daily paper DH has reported. Belgian government prosecutors affirmed that they discovered Salah Abdeslam’s fingerprints, a prime suspect after the November 13 Paris assaults, in a Brussels attack on Tuesday. The raid is still continuing looking for the two other men who were seen with him beforehand. One individual was injured and potentially killed amid a police attack in the Brussels locale of ...