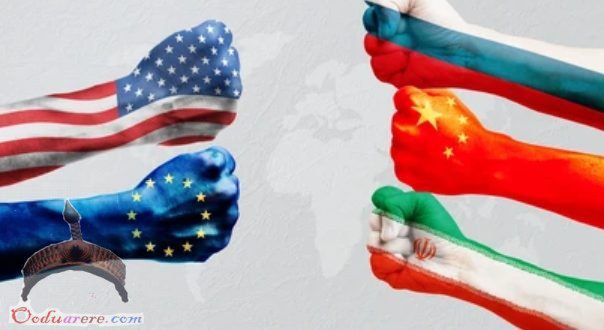 Posted by: AbubakarMuhd in World News Comments Off on Fragmented world’ sleepwalks into World War III

by Pepe Escobar for PressTV, cross-posted with the author’s permission

The self-appointed Davos “elites” are afraid. So afraid. At this week’s World Economic Forum meetings, mastermind Klaus Schwab – displaying his trademark Bond villain act – carped over and over again about a categorical imperative: we need “Cooperation in a Fragmented World”.

While his diagnosis of “the most critical fragmentation” the world is now mired in is predictably somber, Herr Schwab maintains that “the spirit of Davos is positive” and in the end we may all live happily in a “green sustainable economy.”

What Davos has been good at this week is showering public opinion with new mantras. There’s “The New System” which, considering the abject failure of the much-ballyhooed Great Reset, now looks like a matter of hastily updating the current – rattled – operating system.

Davos needs new hardware, new programming skills, and even a new virus. Yet for the moment, all that’s available is a “polycrisis”: or, in Davos speak, a “cluster of related global risks with compounding effects.”

In plain English: a perfect storm.

Insufferable bores from that Divide and Rule island in northern Europe have just found out that “geopolitics”, alas, never really entered the tawdry “end of history” tunnel: much to their amazement it’s now centered – again – across the Heartland, as it’s been for most of recorded history.

They complain about “threatening” geopolitics, which is code for Russia-China, with Iran attached.

But the icing on the Alpine cake is arrogance/stupidity actually giving away the game: the City of London and its vassals are livid because the “world Davos made” is fast collapsing.

Davos did not “make” any world apart from its own simulacrum.

Davos never got anything right, because these “elites” were always busy eulogizing the Empire of Chaos and its lethal “adventures” across the Global South.

Davos not only failed to foresee all recent, major economic crises but most of all the current “perfect storm”, linked to the neoliberalism-spawned deindustrialization of the Collective West.

And, of course, Davos is clueless about the real Reset taking place towards multipolarity.

Self-described opinion leaders are busy “re-discovering” that Thomas Mann’s The Magic Mountain was set in Davos – “against the backdrop of a deadly disease and an impeding world war” – nearly a century ago.

Well, nowadays the “disease” – fully bioweaponized – is not exactly deadly per se. And the “impending World War” is in fact being actively encouraged by a cabal of US Straussian neo-cons and neoliberal-cons: an unelected, unaccountable, bipartisan Deep State not even subject to ideology. Centennary war criminal Henry Kissinger still does not get it.

A Davos panel on de-globalization was rife on non-sequiturs, but at least a dose of reality was provided by Hungarian Foreign Minister Peter Szijjarto.

As for China’s vice-premier Liu He, with his vast knowledge of finance, science and technology, at least he was very helpful to lay down Beijing’s five top guidelines for the foreseeable future – beyond the customary imperial Sinophobia.

Emmanuel Todd was not at Davos. But it was the French anthropologist, historian, demographer and geopolitical analyst who ended up ruffling all the appropriate feathers across the collective West these past few days with a fascinating anthropological object: a reality-based interview.

Todd spoke to Le Figaro – the newspaper of choice of the French establishment and haute bourgeoisie. The interview was published last Friday on page 22, sandwiched between proverbial Russophobic screeds and with an extremely brief mention at the bottom of the front page. So people really had to work hard to find it.

Todd joked that he has the – absurd – reputation of a “rebel destroy” in France, while in Japan he’s respected, and featured in mainstream media, and his books are published with great success, including the latest (over 100,000 copies sold): “The Third World War Has Already Started”.

Significantly, this Japanese best seller does not exist in French, considering the whole Paris-based publishing industry toes the EU/NATO line on Ukraine.

The fact that Todd gets several things right is a minor miracle in the current, abysmally myopic European intellectual landscape (there are other analysts, especially in Italy and Germany, but they carry much less weight than Todd).

– A new World War is on: By “switching from a limited territorial war to a global economic clash, between the collective West on one side and Russia linked to China on the other side, this became a World War”.

– The Kremlin, says Todd, made a mistake, calculating that a decomposed Ukraine society would collapse right away. Of course, he does not get into detail on how Ukraine had been weaponized to the hilt by the NATO military alliance.

– Todd is spot on when he stresses how Germany and France had become minor partners at NATO and were not aware of what was being plotted in Ukraine militarily: “They did not know that the Americans, British and Poles could allow Ukraine to fight an extended war. NATO’s fundamental axis now is Washington-London-Warsaw-Kyiv.”

– Todd’s major giveaway is a killer: “The resistance of Russia’s economy is leading the imperial American system to the precipice. Nobody had foreseen that the Russian economy would hold facing NATO’s ‘economic power’”.

– Consequently, “monetary and financial American controls over the world may collapse, and with them the possibility for the US of financing for nothing their enormous trade deficit”.

– And that’s why “we are in an endless war, in a clash where the conclusion is the collapse of one or the other.”

– On China, Todd might sound like a more pugnacious version of Liu He at Davos: “That’s the fundamental dilemma of the American economy: it cannot face Chinese competition without importing qualified Chinese workforce.”

– As for the Russian economy, “it does accept market rules, but with an important role for the state, and it keeps the flexibility of forming engineers that allow adaptations, industrial and military.”

– And that brings us, once again, to globalization, in a manner that Davos roundtables were incapable of understanding: “We have delocalized so much of our industrial activity that we don’t know whether our war production may be sustained”.

– On a more erudite interpretation of that “clash of civilizations” fallacy, Todd goes for soft power and comes up with a startling conclusion: “On 75 percent of the planet, the organization of parenthood was patrilineal, and that’s why we may identify a strong understanding of the Russian position. For the collective non-West, Russia affirms a reassuring moral conservatism.”

– So what Moscow has been able to pull off is to “reposition itself as the archetype of a big power, not only “anti-colonialist” but also patrilineal and conservative in terms of traditional mores.”

Based on all of the above, Todd smashes the myth sold by EU/NATO “elites” – Davos included – that Russia is “isolated”, stressing how votes in the UN and the overall sentiment across the Global South characterize the war, “described by mainstream media as a conflict over political values, in fact, on a deeper level, as a conflict of anthropological values.”

Between light and darkness

Could it be that Russia – alongside the real Quad, as I defined them (with China, India, and Iran) – is prevailing in the anthropological stakes?

The real Quad has all it takes to blossom into a new cross-cultural focus of hope in a “fragmented world”.

Mix Confucian China (non-dualistic, no transcendental deity, but with the Tao flowing through everything) with Russia (Orthodox Christian, reverencing the divine Sophia); polytheistic India (wheel of rebirth, law of karma); and Shi’ite Iran (Islam preceded by Zoroastrianism, the eternal cosmic battle between Light and Darkness).

This unity in diversity is certainly more appealing and uplifting than the Forever War axis.

Previous: Global South: Gold-backed currencies to replace the US dollar
Next: Ó Dàbọ̀ Vs Goodbye: In the Oodua (Yoruba) language, there is nothing like goodbye.