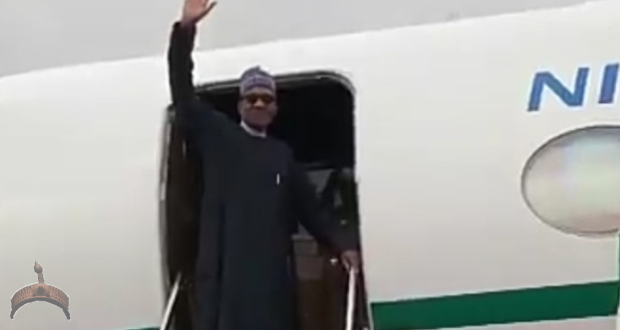 Posted by: AbubakarMuhd in Local News, Politics Comments Off on Buhari departs Abuja Monday for Russia-Africa Summit in Sochi

AbujaPresident Muhammadu Buhari is scheduled to depart Abuja Monday to attend a three-day Russia-Africa Summit in Sochi, Russia, October 23rd – 25th, with focus on exploring and expanding opportunities in security, trade and investment, science and technology, and gas production.

During the summit, President Buhari will meet with President Vladimir Putin of Russia to further strengthen relations in security, trade and investment, and building partnership that will enhance Nigeria’s huge gas potential, following Russia’s remarkable success in gas exportation.

Senior Special Assistant to the President (Media & Publicity),Garba Shehu, made this known in a statement on Sunday.

According to the statement,  the summit, which will be attended by African Heads of State, will bring fresh perspectives on some global issues and challenges like nuclear technology, energy development, digital transformation, environment, technical security, mining and steel, education, agriculture, infrastructure and development strategies.

“An African Business Forum, which will bring together African and Russian business leaders, will be held during the event to enhance Russian investments in Africa, and promote African business interest in the host country,” it added.

Others on the trip are: Minister of Foreign Affairs, Geoffrey Onyeama, Minister of Trade and Investment, Adeniyi Adebayo, Minister of Mines and Steel Development, Olamilekan Adegbite and Minister of State, Petroleum, Timipre Sylva.

Minister of mines and solid minerals development, Olamilekan Adegbite, had during the week, hinted that President Buhari would be visiting Russia next week to discuss the revival of the Ajaokuta Steel Company located in Kogi stte.

The minister, who is also on the president’s delegation to Russia, dropped this hint during an interactive session with the Senate committee on Solid Minerals, Mines, Steel Development and Metallurgy in Abuja on Friday.

The multi-billion Dollar project, conceived and started by the Shagari administration in the early ‘80s, has since been abandoned by successive governments.

President Buhari’s scheduled discussion is sequel to the interest already indicated by the Russian government to revive the abandoned steel project, using its funds.

According to the minister, the Russians had shown interest to help Nigeria revive Ajaokuta with their own money.

Adegbite said: “They want to put Ajaokuta back and we are looking at different methods to engage them.

“Because it is almost completed, they bring in some money to finish what is there and operate it for a while; realise their investment, profit and transfer it back to Nigeria.

“I think this is the best path to revive Ajaokuta and I believe within the tenure of our time, we will achieve this.”

The Nigerian government has so far sunk over $4.6 billion (about N385 billion) into the Ajaokuta steel project, which is envisaged to be used to generate important upstream and downstream industrial and economic activities that are critical to the diversification of the Nigerian economy into an industrial one.

In June 2017, the Sole Administrator of the company, Joseph Onobere, told journalists during a facility tour of the complex that only $400million (about N145.6 billion) was required to complete the project, which was conceived and started by the Shehu Shagari administration in 1979.

Previous: ‘What did I do to you?’ – Last words of Gaddafi to rebels just before he was killed
Next: Stand with Tulsi against Clinton’s new McCarthyism and warmongering