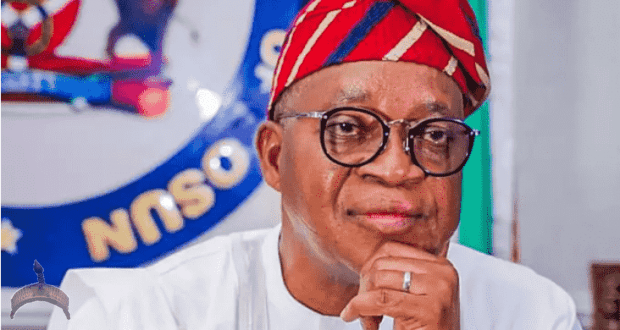 Posted by: Lolade in Politics Comments Off on How I sustained Osun economy without borrowing in four years – Oyetola

According to the governor, he successfully kept the faith and maintained fidelity to his electoral promises since the assumption of office.
Governor Oyetola was sworn in on 27th November 2018 taking over from his predecessor, former Governor Rauf Aregbesola.
The results of the last governorship election as declared by the Independent National Electoral Commission (INEC) favoured Senator Ademola Adeleke, a decision that is already being challenged by Oyetola and his party — the All Progressives Congress, APC — at the Osun State Governorship Election Petition Tribunal, sitting in Osogbo.
Oyetola in his address averred that his administration has put Osun’s economy on a surer footing through the myriad people-centered and masses-focused projects timely and promptly implemented to make life worthwhile for the people of the State.

According to him, Osun under his watch has been stable economically as manifested in the astronomical increment in the GDP of the State since he assumed office.
Governor Oyetola affirmed that Osun is more stable economically than he met it in 2018, saying despite all the visible socio-economic challenges confronting the State with its attendant effects, he was able to take care of the fears and evil of fiscal indiscipline and lack of implementation, which hamper projects and services in the nation’s public service.
“As I step aside today following the conclusion of the four-year tenure you freely gave me, I thank God and I thank you for your support, cooperation and prayers over the years.

“I recall how the journey began four years ago; how by your belief in me and your conviction in the plans and programmes of our Party, you exercised your right to vote for me.
“As we draw the curtains on this first tenure, we are convinced that we neither reneged on our promise nor disappointed you. We kept faith in you and maintained fidelity to our electoral promises. It was our wish to continue to serve you but we are constrained by the outcomes of the July 16 Governorship election which we are already challenging in court.
“As a law-abiding citizen and government, we are stepping aside to allow the law to take its course.
“However, we look forward to continuing to serve you in no distant future. We have absolute trust in God that we shall be back soon, as we have implicit trust and confidence in the Judiciary to do justice in the case before it.

“We are confident that this period of temporary political eclipse shall pass. The sun shall shine again, brighter and warmer and the sustainable development and participatory governance that we enthroned, which have been applauded by local and international organizations, shall be restored and put on a surer and better footing.
“There can be no substitute for people-oriented and development-savvy governance in a democracy. The tap roots of the unprecedented good governance, inclusive and participatory governance that we introduced, which delivered massive equitable projects and programmes are too strong to be uprooted.

“As we end our first term, rest assured that Osun is a more stable economy than we met it in 2018 and it remained the most peaceful state in the country under our leadership.
“For four years, we did not take any bank loan facility. But we benefitted from the N3billion monthly intervention from the Federal Government to all the States for six months to cushion the effect of deductions of budget support facility and salary bailout accessed by the previous administration, just as we have paid N97 billion from the total debt we inherited in 2018.
“We are leaving behind cash of over N14 billion. In addition to the N14 billion cash, another N8 billion is expected between December and January from our performance in SFTAS and the IGR. Also, another Seventy-Two million Dollars will come to the State soon from RAMP 3, NG-CARES, Nigeria for Women Project and Ease of Doing Business. These are earned, based on performance. And we have indeed performed to earn them. It was part of the same performance that earned us the award of Best Governor on Efficiency of Public Expenditure and TOP Performer on Domestic Revenue Mobilisation by the World Bank’s States’ Fiscal Transparency, Accountability and Sustainability, SFTAS, recently.

“We have gone this length to let you know that Osun under our leadership was sustainable. It was done through fiscal discipline and personal sacrifices.
“On behalf of our team, I appeal to you all to continue to be law-abiding and to work assiduously to build the Osun of our dream. Together, we shall continue to mend the broken walls of our dear State and restore her glory for our collective good and that of posterity. Thank you all and may God continue to bless Osun,” Oyetola added. 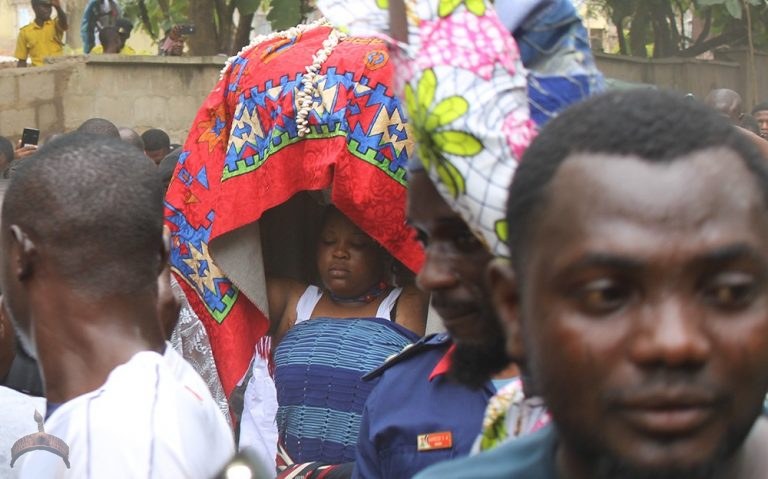