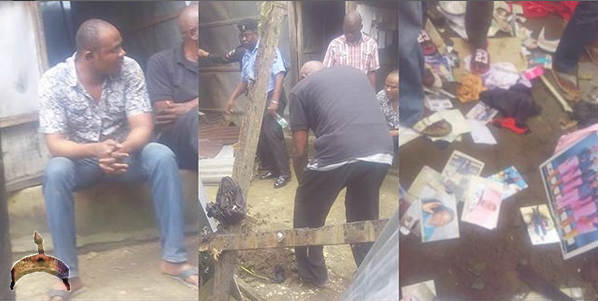 Photos: Pastor Nabbed After Heart Of Missing Child Is Found In His Church.

Posted by: Lolade in Politics, Religion Comments Off on Photos: Pastor Nabbed After Heart Of Missing Child Is Found In His Church.

There clearly was pandemonium, yesterday, at 3, Okon Edak Street, off Atamunu, Calabar, Cross River State premises of a church, when the fresh heart of a one-year-old girl, Success Ime, was discovered in the church. .Subsequently, the G.O of the Ministry, a Reverend, was arrested for allegedly utilising the girl for unscripted ritual..

Other things, including goat heads, dead chicken, male and female effigies, wooden boat, crafted camel amongst others, were uncovered by men of Uwanse Police Division..

The grandmother of the victim, Mrs Arit Ime, revealed that at about 3a.m. yesterday, they heard banging on the door, following which two masked men entered their room at 8, Okon Edak Street and took away Success.

A Police source said they got a distress call from the region and swung into action and that while trying to find Success’assailants, many people in mask were arrested..

The source said: “Some persons have been arrested including one Okon, who said he was sent by the Reverend to kidnap the girl. Six other persons were arrested alongside the G.O of the church with various fetish items, including a human heart.”

Previous: Simi Says I’m Not Dating Him, I Was Not Dating Him
Next: Manipulated minorities represent a major danger for democratic states