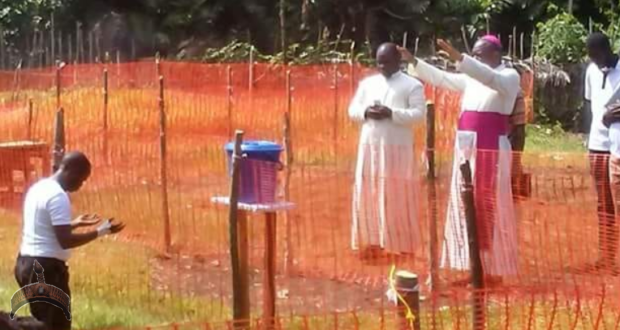 A Catholic priest has contracted the Ebola virus in the Democratic Republic of Congo amid an ongoing outbreak that began in the nation earlier this month. The priest, who has been identified as Fr. Lucien Ambunga, – was reportedly infected in the city of Mbandaka.

The clergy was pictured receiving prayers from other the Bishop and priests after being quarantined. Extremely contagious and highly deadly, Ebola gained major international attention during the 2014-2016 epidemic in West Africa that left a lot more than 11,000 people dead.

In the most recent outbreak in DRC, the initial case of Ebola was reported on May 8 in the rural Equateur province near Bikoro, and later spread to Mbandaka. The World Health Organization has stated that the odds of Ebola spreading to other areas of the nation are “very high.”

Previous: EFCC Raids Notorious Yahoo Boys Hide Out In Uniben (Photo)
Next: Which chicken is different from the rest,? only a genius can tell …☺️☺️