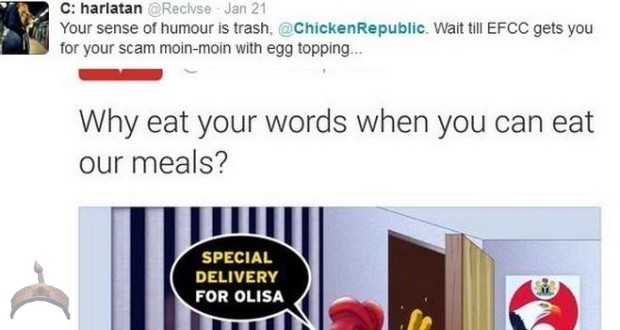 A week ago, one of Nigeria’s famous fast food joints tweeted an advertisement on their official twitter page; “Why eat your words when you can eat our meals” and “Special delivery for Olisa” with an EFCC logo on the ad, which is in reference to reports that PDP Spokesman Olisa Metuh purportedly ate or attempted to eat a document containing statements he made to the EFCC.This was professedly done by Olisa Metuh so that the record won’t be utilized as proof against him as a part of court. However,Olisa Metuh denied he did anything like that.Despite this, Chicken Republic kept on utilizing the discussion as an publicity stunt for their brand.

Nigerians have taken to Twitter to react,blasting Chicken Republic for their decision of ads.See how Nigerians responded on twitter after the page break.