The National Youth Service Corps (NYSC) said on Monday that it has sent 2,200 corps individuals to Borno State for the 2015/2016 administration year. The Public Relations Officers of NYSC in the state, Mr. Suleiman Aliyu, who revealed this in Maiduguri, the state capital, said:

Aliyu , who said that the 2,200 corps members would do their introduction in Benue, Gombe and Nasarawa States, also said that Katsina State had been assigned to host the 2015 Batch B stream orientation programme.

‎The NYSC official however regretted that the Boko Haram emergency which has tormented the state subsequent to 2011 was in charge of the migration of the orientation camping to outside the state , saying the state facilitator of the plan might want to see the state senator, Alhaji Kashim Shettima, grace the swearing in function of the corps members on Friday. 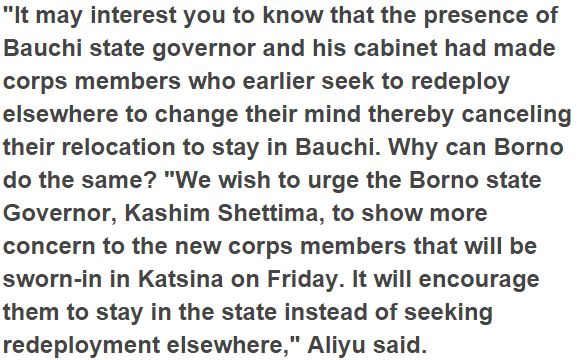