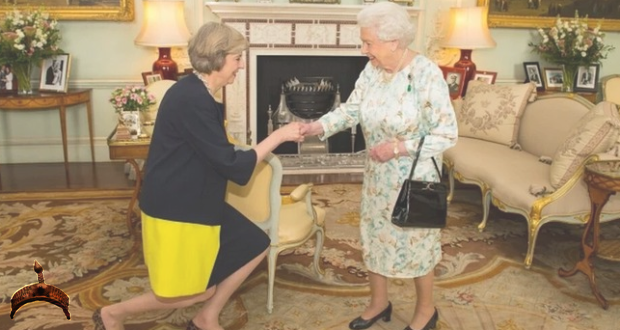 Posted by: ayangalu in Breaking News, Foreign Comments Off on Theresa May pictured Kneeling To Greet Queen Elizabeth (Photo)

Theresa May formally appointed British prime minister by the Queen. See Cameron’s advice to her bellow.

“My advice to my successor, who is a brilliant negotiator, is that we should try to be as close to the European Union as we can be for the benefits of trade, cooperation and of security,” Cameron told parliament in his last appearance before resigning.

Appearing later in Downing Street with his wife Samantha and their three children, he delivered his parting remarks to the nation after six years dominated by the Europe question and the aftermath of the global financial crisis.

“It’s not been an easy journey and of course we’ve not got every decision right,” he said, “but I do believe that today our country is much stronger.”

May is seen by her supporters as a safe pair of hands to steer the country through the disruptive Brexit process. Colleagues describe her as cautious, unflappable and intensely private.

“I think around the cabinet table yesterday the feeling was that we have our Angela Merkel,” said Jeremy Hunt, health secretary in Cameron’s team which met for the last time on Tuesday.

“We have an incredibly tough, shrewd, determined and principled person to lead those negotiations for Britain,” Hunt told Sky News television.

Oyinbo too dey do am, stop maligning Yorubas… Best tribe Eledumare  ever created..

Tagged with: Theresa May

Previous: David Cameron attends last PMQs
Next: IFA and its opposite principles – what my teacher taught me