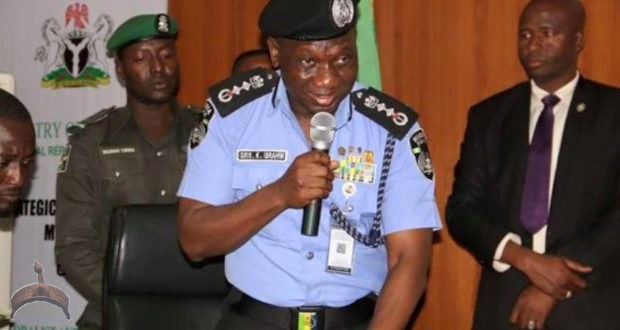 Buhari Has Ordered Me To Redouble Strategies To Curb Killings, IGP Declares

Posted by: Lolade in Local News Comments Off on Buhari Has Ordered Me To Redouble Strategies To Curb Killings, IGP Declares

The Inspector – General of Police , Ibrahim Idris , has disclosed that President Muhammadu Buhari has ordered him to redouble efforts to tackle the killings around the world.  Idris disclosed this yesterday at the state handover of 150 operational vehicles to the authorities by Dangote Foundation.

He promised that herders/ farmers clashes and other security challenges in the country would soon be described as a thing of the past .

He said: “The President and Commander -in- Chief of the Armed Forces of the Federal Republic of Nigeria has mandated me to redouble the police crime prevention and detection strategies , to ensure that the situation is brought under control. ”

The IGP explained that efforts of the police in crime prevention are already yielding the desired results .

“In that regard and in compliance with the directive of Mr . President , the commissioners of police of the states and their supervisory Assistant Inspector -Generals of Police have been directed to ensure an immediate end to the challenges . This is by deployment full police crime fighting arsenal at their disposal.”

He also warned politicians against the utilization of firearms and arming of political thugs in the build around the 2019 general elections.

He warned that anybody, regardless of how highly placed , found to be engaged in the illegal activities would be arrested and prosecuted, in respect with laws of the land.

Meanwhile , Governor Kashim Shettima of Borno State has disclosed that ‘ no part of the state is under ‘ Boko Haram occupation. ’

He made the clarification yesterday when the new General
Officer Commanding ( GOC ), 7 Division of the Nigerian Army, Maj – Gen.Abdulmalik Biu , visited him at the Government House.

He explained the clarification became necessary to fix the insinuation by some enemies of progress and development. He explained although there have been pockets of attacks by insurgents on some soft targets , the military and other security agencies deserve commendations in restoring law and order in their state and the northeast.

Previous: See Ex-Govenor’s Face Pic, Jolly Nyame after He was Jailed For 14 Years
Next: ‘Russia-US direct conflict in Syria was close, but avoided’ – Assad to RT (MUST SEE)