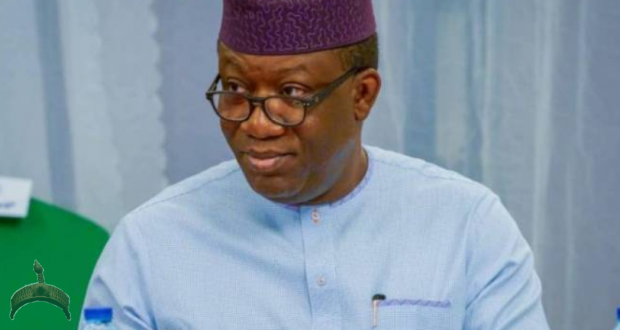 Posted by: Lolade in Local News Comments Off on Gov. Fayemi Meets Buhari Over 2023 Presidential Race

Governor Kayode Fayemi of Ekiti State has informed President Muhammadu Buhari of his intention to seek the presidential ticket of the All Progressives Congress (APC) ahead of the party’s forthcoming presidential primary, a presidency source has told PREMIUM TIMES.

“He (Fayemi) came here two weeks ago to inform the president that he would be running,” the official disclosed, asking not to be named because he had no permission to discuss the matter with journalists.

“The president received him well and encouraged him to go ahead, saying having worked closely with him in the past few years, he is confident he would make a good successor.”

The source said it however remained unclear if Mr Buhari would throw his weight fully behind Mr Fayemi’s candidature especially given the fact that he has kept the identity of his preferred successor secret.

When contacted Tuesday night, Mr Fayemi confirmed he met Mr Buhari but declined to provide details of what he discussed with the president.

Messrs Buhari and Fayemi have had a close political relationship for almost a decade beginning in 2012 when the defunct Action Congress of Nigeria (ACN), All Nigeria Peoples Party (ANPP), Congress for Progressive Change (CPC) and a faction of the All Progressives Grand Alliance (APGA) began talks to merge into a single political platform.

After the APC came to power in 2015, Mr Buhari appointed Mr Fayemi as the minister of solid minerals development, a position he held until May 30, 2018, when he resigned to again contest the Ekiti governorship election which he won.

Since 2019, Mr Fayemi has been the chairperson of the Nigeria Governors’ Forum, an association of the country’s 36 governors, which again provided him with an opportunity to regularly interface with the President.

It, however, remains unclear whether this long-term working relationship would count for something when Mr Buhari eventually settles for a preferred successor.

Why Fayemi is yet to declare

Meanwhile, sources close to Mr Fayemi’s campaign told one of our reporters that the governor remained interested in seeking the presidential ticket of his party but is waiting for the most auspicious time to make a formal declaration.

“As you know, this is a most spiritual moment for Christians and Muslims. The Lent season is on and so is Ramadan. The governor believes it is spiritually disruptive and inappropriate to infuse too much politicking into this period. But he will surely declare once Ramadan ends in less than three weeks,” one of the sources said, asking not to be named because he has no permission to discuss the matter with journalists.

The official said despite not having formally declared, Mr Fayemi has of late been engaged in intense consultation across the country selling his candidature to fellow governors, top government officials and party leaders.

Another source close to the governor also confided that Mr Fayemi visited the National Chairman of the APC, Abdullahi Adamu, on Tuesday evening during which he formally informed him of his intention to seek the presidential ticket of the party.

He said beginning Wednesday, the governor would be visiting states of the federation to meet with party leaders and prospective delegates to the forthcoming presidential primaries.