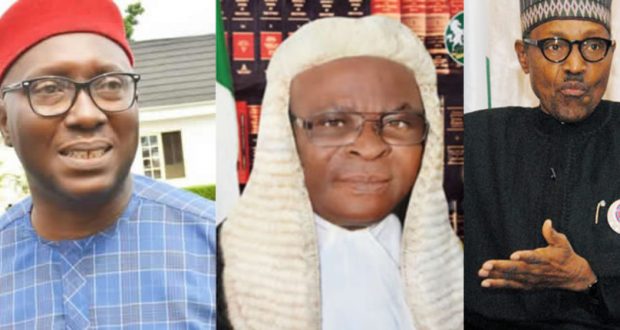 Aghanya: I’ve No Regrets In Role Played In Sack Of Onnoghen

Posted by: chucks in Politics Comments Off on Aghanya: I’ve No Regrets In Role Played In Sack Of Onnoghen

…Says any day he sees ex-CJN, he’ll tell him to apologise to Nigerians

The Executive Secretary, Anti-Corruption and Research Based Data Initiative (ARDI), Chief Dennis Aghanya, has said that the removal of the immediate past Chief Justice of Nigeria (CJN), Justice Walter Onnoghen, from office, has nothing to do with the death of the duo of Mallam Abba Kyari and Aliyu Umar (SAN).

Aghanya spoke against the backdrop of recent insinuations on the social media regarding the alleged roles played by Kyari and Umar in the removal of Onnoghen.

Aghanya, however, said: “What is shocking to me is how unreasonable people could twist narratives just to suit their individual political, ethnic, religious and social affiliations. It is a dangerous trend for any society.”

Aghanya looked back and submitted that both Umar and Kyari (if he was ever involved at any point) did their country a service in the removal of Onnoghen from office. Excerpt:

What is your take on social media comments regarding the death of the late Chief of Staff to the President, Mallam Abba Kyari and Aliyu Umar (SAN) on their alleged roles in the removal of Justice Walter Onnoghen from office as CJN?

Those circulating such are either ignorant or blindly sentimental. Everyone involved in the trial and conviction of Onnoghen, including myself, should be considered a patriot and never be disrespected by those who support corrupt practices. Both Umar and Kyari (if he was ever involved at any point) did their country a service and we were supported by the verdict of every branch of the judiciary from the Code of Conduct Tribunal to the Court of Appeal to the Supreme Court, and also by the National Judicial Council. Any lawyer, including Umar and his legal team, that received that level of corroboration from the appellate courts and bodies in any case he tried is a competent and capable attorney.

Going by how they linked April 18th, the day Onnoghen was removed to the death of the duo, is it not shocking to you?

No! Rather, what is shocking to me is how unreasonable people could twist narratives just to suit their individual political, ethnic, religious and social affiliations. It is a dangerous trend for any society.

If their postulations are actually true, are you not scared that something terrible may happen to you?

Both the just and the wicked die. That is what my Bible says. But if what they circulate on social media is anything to go by, then there would be no reason living a just life. If exposing corruption would become a crime, our law enforcement agencies and the court should be scrapped so that we live in a lawless society. The opinion by this negligible few in the society didn’t start today. The Jews were instigated by the bourgeois, Pharisees and Sadducees, to request for the release of a murderer, Barabbas, while Jesus Christ should be crucified.

In retrospect, do you have regret over the role you played in Onnoghen’s removal?

Let me give you a little background story. Justice Walter Onnoghen was among the judges the Justice Kayode Eso Panel, which the late Head of State, Sani Abacha, set up to probe allegations of judicial corruption in 1994. He was found guilty and recommended for dismissal. Onnoghen was then a judge in the Cross River State high court and was accused of trading justice to the highest bidder. But luckily for him, he had been promoted to the Court of Appeal when the implementation of the recommendation of the Eso Panel was carried out against only judges of high courts across the country. So, it was not a coincidence that he was again prosecuted on corruption charges. The money we found in his various accounts during our investigation was too much for a serving judge. I guess that was why he deliberately left out some of his bank accounts as required by law during his asset declaration. I also read that for 18 months, the former Chief Justice did not withdraw from his salary account. So, how was he surviving then? I can’t regret my actions for exposing such a man.

If you happen to see Onnoghen, what will you tell the former CJN?

I will simply tell him to apologise to Nigerians for betraying the public trust reposed in him and move on with life. Outside his offence, I see him as a father and I wished he never got his hands soiled in that mess.

So, you won’t apologise to him?

He should rather apologise to me for all the bashing and punches I have been receiving from his overzealous loyalists. Do you think the information I gave out about him were new in the public domain? No! It was horded because of corruption. This administration allowed his trial because of its stand against corruption.

If asked to swear by either the Bible or Koran that you were not paid or sponsored to go after Onnoghen, will you do that?

Why would I need to swear with any of the holy books, that the facts I revealed about Justice Walter Onnoghen were not correct? I am rather disappointed that the country has not considered me worthy for a National Award on account of my selfless service in this Onnoghen case, which has brought in level of sanity in the judicial sector.

What was your relationship with Kyari and Umar before their demise?

I never met Abba Kyari one on one before he died. For Aliyu Umar (SAN), I only met him once because he was the lawyer who prosecuted the case on behalf of the Code of Conduct Bureau and I am the petitioner. I also want to inform you that I met President Buhari last in 2011 when I was his media spokesperson and the National Publicity Secretary of his defunct party, Congress for Progressive Change (CPC).

What is your take on the death of the duo of Kyari and Umar?

Death awaits both the wicked and the righteous. The only difference is that the righteous is at peace because they have the confident hope of immortality.

What is next on your agenda, politically or otherwise?

I was a very active politician before I went into anti-corruption advocacy. I love the anti-corruption role, though risky. And I am finding peace and pleasure in it. My life has not been the same since my role in the Onnoghen saga. I mind my business now. Sometimes, you consider it complex fighting for a society like Nigeria.

Previous: Life as an almajiri in Kano: Man Recalls Escaping And Being Rescued By Igbo Family That Sent Him To School
Next: NCDC is marketing #CoronaVirus and destroying our Lives.