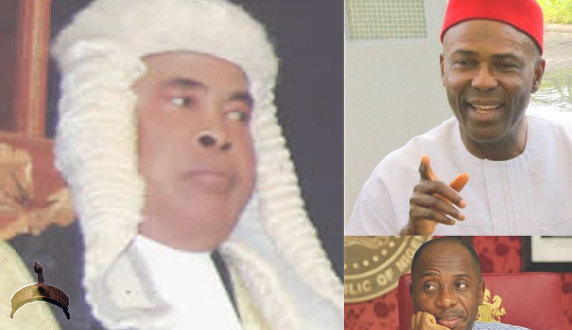 Another Justice of the Supreme Court whose home was raided by operatives of the Department of State Service, DSS, Justice Sylvester Ngwuta, has opened fresh can of worms, alleging that his ordeal was a function of his refusal to help the APC pervert justice in governorship election disputes involving Ekiti, Rivers and Ebonyi states.

Justice Ngwuta, in a letter to the Chief Justice of Nigeria, CJN, Justice Mahmud Mohammed and the National Judicial Council, NJC, specifically fingered the Minister of Transport, Mr. Rotimi Amaechi and Minister of Technology, Dr. Ogbonnaya Onu, as those that approached him on behalf of the APC.

In the letter, Ngwuta, said Ameachi begged him to facilitate the removal of Gov. Fayose of Ekiti State. He further disclosed that shortly after the Supreme Court affirmed the election of Gov. Wike of Rivers State, Amaechi also called him on phone and said “Oga is not happy”.