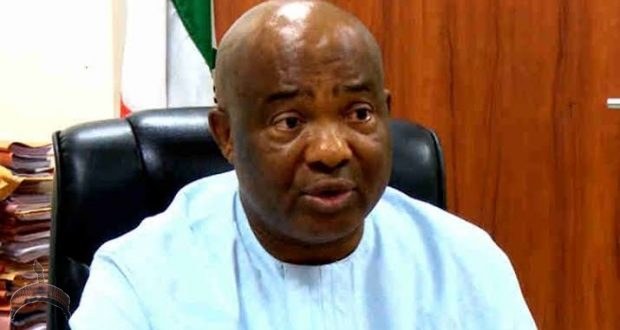 My Victory Is For Imo People – Uzodinma

Posted by: chucks in Politics Comments Off on My Victory Is For Imo People – Uzodinma

Governor Hope Uzodimma of Imo state has dedicated his victory to God, saying “it’s for the people of Imo.”

The Supreme Court had on Tuesday dismissed the application of former Governor Emeka Ihedioha, where he asked the court to reverse its January 14 judgement, which sacked him as the governor of the state.

The court had held that it lacked the jurisdiction to entertain the case as its January 14 judgement is final and irreversible.

Speaking in Owerri on Wednesday, the governor asked all the people of the state to rally round him for the progress of the state.

Uzodinma extended his hands of fellowship to every Imolite, saying the state is for everybody. “I’m the governor of all Imo people and I want us to put away our political differences for the sake of the state.

I am inviting supporters of other parties to see Imo as their own and Hope Uzodinma as their governor. In this way, we will move the state forward.”

Previous: Gbajabiamila: I Celebrated My Mother’s Birthday With Few Friends
Next: Oshiomhole’s Suspension: Hon. Osagie Accuses Judge Of Succumbing To Pressure From Governors Obaseki And Bagudu

The Executive Secretary of National Land Development Authority (NALDA ) , Mr Paul Ikonne says the establishment of 109 Integrated Farm Estate by the Federal Government has nothing to do with Ruga or ranches. The News Agency of Nigeria ( NAN ) reports that President Muhammadu Buhari had directed NALDA to establish integrated farm estates in all the 109 senatorial districts to boost food production across the country. Pan-yoruba socio -political organisation, Afenifere, had in a statement by its spokesman, ...