Posted by: Lolade in Politics Comments Off on Ministerial List: After 35 years, What is AUDU OGBEH” still doing on this list?? 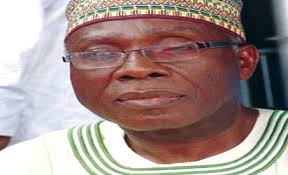 “Can anyone really give me a cogent, cohesive and coherent argument what a person like this old cargo “AUDU OGBEH” is still doing on this list??

If I remember correctly, he was on the list of Shagari’s ministers in 1979 and screened by the leader of the Senate then, Dr. Olusola SARAKI. He is again on Buhari’s list of 2015 Ministers to be screened by Late Olusola Saraki’s son, another SARAKI – the Current Senate President who was probably 15 or 16 years when OGBEH was nominated as Minister in 1979.

What is really wrong with our so called leaders. Is this really change??
Nothing has really changed, and come 2019, or even before then, Nigerians will be repenting at leisure that Nigeria has made another monumental mistake to effect change again!!”
(Nigerian Politics)

Previous: Check out 54 Incredible Facts That You Might Not Know About Nigeria
Next: Check out Top 10 Flashy Ride Your Favourite Nigerian Music Star Is Using