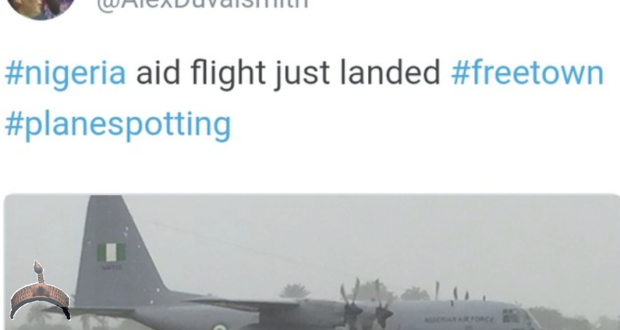 Posted by: Lolade in Politics Comments Off on Nigeria Sends Airplane To Sierra Leone To Deliver Humanitarian Aid (Photo)

The Economic Community of West African States (ECOWAS) has donated ₦146Mln ($400,000) to Sierra Leone’s victims of victims of floods and mudslides.

A torrential rainfall and mudslides occurred on Monday 14 August 2017 in and around the Sierra Leonean capital, leaving more than 300 dead, including children. They were given a mass burial on the outskirts of the capital Freetown.

Some 600 people are still thought to be missing while more than 400 people are known to have died. About 3,000 people are homeless and several houses and properties damaged by the disaster.

Previous: Prresident Buhari addresses Nigerians after medical leave; Read transcript, Watch video
Next: Understanding the root cause of Western hatred Towards Russia: Interview with the Saker On Russia