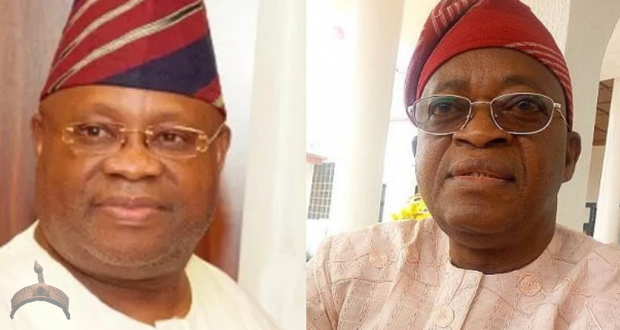 Posted by: Lolade in Politics Comments Off on Supreme Court Adjourns Judgment On Adeleke’s Appeal Till July 5

Nigeria’s Supreme Court Monday adjourned the judgement for the appeal filed by Ademola Adeleke against the election of Osun State governor Gboyega Oyetola till July 5.

Adeleke, the People Democratic Party candidate for the Osun State September 2018 election, is asking the apex court to set aside the decision of the Court of Appeal in favour of Oyetola of the All Progressives Congress.

Adeleke also contended that the Court of Appeal erred in law when it upheld the appeals by APC and INEC, challenging the decision of the tribunal.

The Independent National Electoral Commission (INEC), had declared Oyetola winner after a controversial re-run election was conducted in parts of the state on September 27, 2018.

On March 22, 2019, the Osun State Governorship Election Petitions Tribunal in Abuja declared Ademola Adeleke the winner of the elections.

The three-member panel of the tribunal, in a split judgment of two-to-one, declared the Peoples Democratic Party’s candidate the winner of the September 2018 election.

The tribunal, through the majority judgment, nullified the certificate of return issued to Mr Oyetola of the All Progressives Congress by INEC and ordered the commission to issue a fresh one to Mr Adeleke.

However, on May 9, the Court of Appeal, in Abuja, nullified the tribunal’s decision.

A five-member panel of the appeal court led by Jummai Sankey delivered the judgement with three members of the panel agreeing with the lead judgement.