Chibok girls have not been killed – FG says

Posted by: Lolade in Local News Comments Off on Chibok girls have not been killed – FG says

In a bid to dowse speculations in some quarters that the missing Chibok girls have been killed following the recent recapture of most of the strong territories Boko Haram occupied with no sign of the girls, the Federal Government has come out to state that the girls are still alive and that hopes for their rescue must be kept alive.

At a press conference in Abuja today April 8th, the Coordinator of National Information Centre (NIC), Mr Mike Omeri, said that hopes for the rescue of the Chibok girls is still high and that until the military concludes the recapture of all lost territories from Boko Haram, speculations of their death would not be entertained

“The search for Chibok girls continues and that is why even with capture of Bama and the rest, security and military have never relent, and until it is concluded, we cannot begin to believe speculation. I think the one year anniversary is next week, and we hope to give a comprehensive report on what we know so far, and how far the searching has gone. So, the assurance I will give you, is that everywhere is being combed and whatever element we found will be revealed to appropriate authority and nobody is going to keep anything secret.”he said 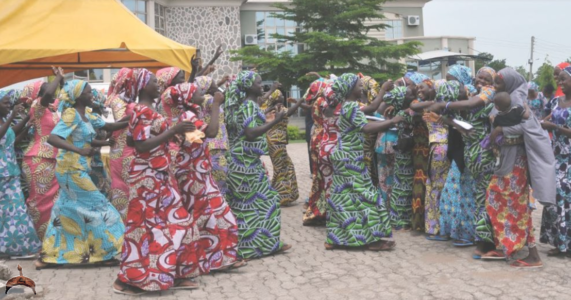 The dozens of Nigerian schoolgirls who were freed from their Boko Haram kidnappers earlier this month have finally been reunited with their families. The 82 ladies, have been among the 276 kidnapped in 2014 from their school in the little town of Chibok in northeastern Nigeria, were picked up by Nigerian authorities after their release May 7 and taken quickly to the capital, Abuja, but have only now been reunited with their own families there. “I am really happy today, I am Christmas and New Year, I am very happy and I ...