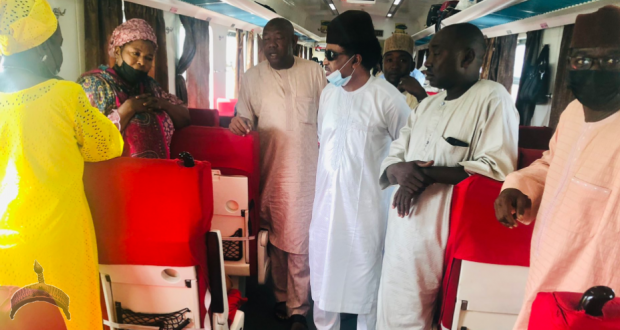 Posted by: AbubakarMuhd in Local News Comments Off on How Terrorists Attacked Kaduna-Abuja Train – Shehu Sanni

Former Kaduna Central Senator, Shehu Sani has described how he nearly escaped death after terrorists attacked the Kaduna Abuja railway he was on board with an explosive.

Bandits attacks are on the rise and Shehu Sani has advised Nigerians to look out for themselves as the bandits are on the loose trying to kidnap people.

According to Sani, he escaped the plot of bandits when the driver of the train he was traveling in run over some explosives planted on the railways by bandits.

He wrote: yesterday, terrorists attacked the Kaduna Abuja railway with an explosive & opened fire on the train, targeting the Engine Driver & the Tank. This morning,I was on board when our train ran over another explosive damaged rail track. It took a miracle for us to escape.

Yesterday,terrorists attacked the Kaduna Abuja railway with an explosive & opened fire on the train,targeting the Engine Driver & the Tank.This morning,I was on board when our train ran over another explosive damaged rail https://t.co/IuAYGPd3xA took a miracle for us to escape. pic.twitter.com/QAJVnLdOaw

See some reactions from some concerned Nigerians after they saw the message.

@oRiGiNaL_RePee: Subhanallah… I am Afraid for you Senator.
Please avoid the trains & take wings.

@ogbodo_collins: Why are you afraid for just him alone and not for the other civilians in their masses who boarded the train with him? You should’ve also told him to relocate to Europe and hide from the disasters they have created here. I like how he experienced this incidence live and direct

@Northerner0: It’s hight time to go back to the road l, it’s Allah that protect not following train.

@DavidHundeyin: What a waste of money. Goodluck should have invested in a viable railway somewhere down south instead of this white elephant that they won’t even leave to elephant in peace. $800m for this absurdity.

@handxtend: Nothing will grow here in the north. Nothing. We are going to be in a very deep shit for Allah knows when. Best option is for the south to leave the north as soon as you can because this marriage isn’t working, and the north is hell bent to drag the south down too.

Previous: Losing Everything in Vegas Is Legal, but Heaven Forbid We Buy Crypto Assets: Raoul Pal to SEC (Welcome to the Land of the Free)
Next: Bitcoin briefly crashed 87% to about $8,000 on Binance’s US crypto trading platform