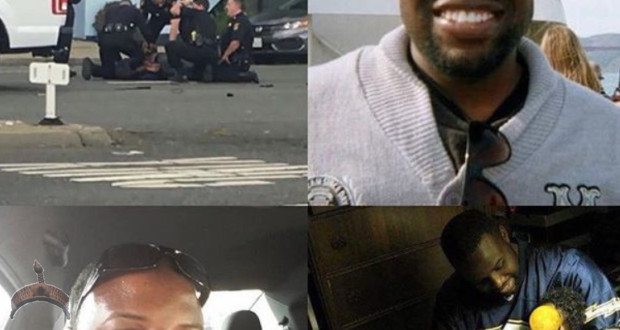 Posted by: Lolade in Local News Comments Off on U.S Police Tasered a Nigerian Man To death

A 36-year-old Nigerian father of one that died during a struggle with police, on Wednesday, has been identified by the San Mateo County Coroner’s Office as Chinedu Valentine Okobi.

The confrontation occurred on the 1300 block of El Camino Real in Millbrae about 1 p.m. Wednesday.
The San Mateo County Sheriff’s Office said Okobi was running in and out of traffic and “immediately assaulted” a deputy who tried to speak to him.

Four other deputies helped take Okobi into custody. One fired a Taser, said San Mateo County District Attorney Steve Wagstaffe, whose office is investigating the death with the coroner.  Okobi was taken up to a hospital, where he was pronounced dead.
The deputy Okobi allegedly attacked, was also treated at a hospital for unspecified injuries.

The deceased was not armed, but he stood 6-foot-3 and weighed 330 pounds, Wagstaffe said. All of the deputies who were involved in the confrontation have been placed on paid leave.

The investigation, which will include Okobi’s official cause of death, is expected to take no more than 10 weeks.

However, in a post on Facebook, his elder sister, Ebele Okobi, said he was struggling with mental issues.