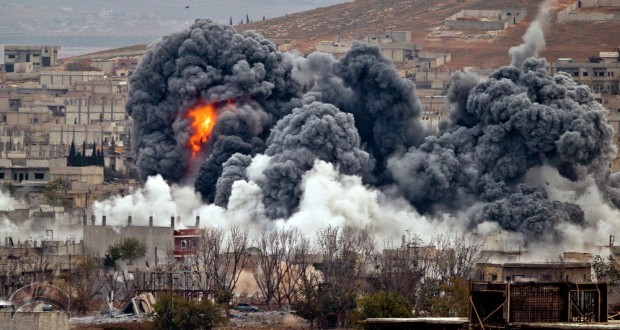 Posted by: BalogunAdesina in World News Comments Off on Mysterious Aircraft Pound Turkish Oil Smugglers In Syria. US Supply Convoys Are Blown Up In Iraq

The first month of 2021 was marked by a new round of violence in Syria. The situation was especially complicated in Greater Idlib, northern Aleppo and in the central desert.

On January 8, ISIS terrorists launched a large attack on government forces in the eastern countryside of Hama. After a series of clashes with the Syrian Army and pro-government militias, terrorists captured a number of positions near the towns of Rahjan and al-Shakusiyah. As of January 12, ISIS cells retreated from these positions under pressure from the army. Nonetheless, at least 19 government troops and 12 ISIS members were killed in the clashes.

Meanwhile in the eastern countryside of Homs, ISIS cells destroyed a pickup of the al-Quds Brigade, a Palestinian pro-government group, with an improvised explosive device. According to pro-opposition sources, at least 44 pro-government fighters have been killed in the clashes in the desert area since the start of the year. The number of the eliminated terrorists is reportedly over 35.

Sources affiliated with Russia-linked private military contractors claim that the deterioration of the security situation in western Deir Ezzor is a result of the withdrawal of a majority of Russian specialists from the area.

At the same time, Iranian-backed forces continue their work to expand the Imam Ali Base near al-Bukamal. The base, operated by Iran’s Islamic Revolutionary Guard Corps, is allegedly designed store precision-guided missiles in a network of underground tunnels in the area. The base was repeatedly targeted by Israeli and even US strikes in 2019 and 2020. Despite this, the strikes did not cause any major impact as the base’s military infrastructure has been steadily expanding.

January 9 also became the first day of 2021 when the Russian Aerospace Forces carried out strikes on terrorist targets in Greater Idlib. Strikes hit several hills in outskirts of the town of Kabani, which is known for being stronghold of Hayat Tahrir al-Sham and the Turkistan Islamic Party. A day earlier, forces of Hayat Tahrir al-Sham shelled Syrian Army positions in northern Lattakia injuring several soldiers.

These developments coincided with some strikes by some ‘mysterious aircraft’ that once again bombed Turkish-linked oil smugglers in northern Aleppo. This time the infrastructure of the smugglers was destroyed near the village of Tarhin.

The situation in neighboring Iraq is also not stable. Just on January 9, 3 supply convoys of the US-led coalition became targets of IED attacks in the central and southern regions of the country. These attacks are a logical continuation of the ongoing standoff between the US-Israeli bloc and the Iranian-led Axis of Resistance. Iranian-backed forces in Iraq conduct these attacks as a part of their campaign to force the US to withdraw its forces from the country.

While some expect that a Biden administration would be less interested in an increase of confrontation with Iran, there are no indications that the sides can fully settle their contradictions in any way in the nearest future. Therefore, the entire region will remain a battleground for the warring blocs.

Previous: Phyno: Why “Igbo Artists” Not Helping Upcoming Ones
Next: Beware Of Flash Coin Sellers, Don’t Let This Happen To You.