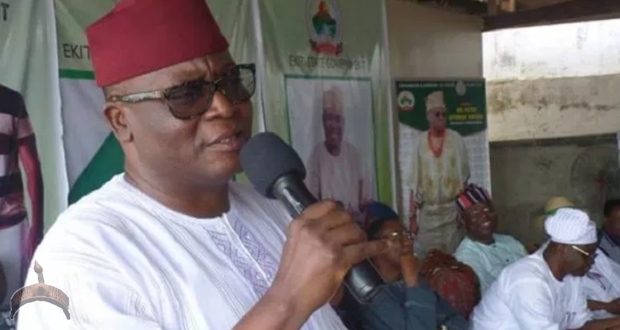 Adeyeye: Why I Dumped PDP For APC

Posted by: Lolade in Politics Comments Off on Adeyeye: Why I Dumped PDP For APC

ONE of the aspirants for the governorship ticket of the Peoples Democratic Party (PDP) in Ekiti State, Dayo Adeyeye, has defected from the party to the All Progressives Congress, (APC).

Adeyeye, a former spokesperson of the PDP, announced his defection and those of his supporters to the APC on Tuesday.

Adeyeye, who was former Minister of State for Works during the PDP regime of former President, Dr. Goodluck Jonathan, lost the primaries of the party to the Deputy Governor of Ekiti State, Prof. Kolapo Olusola-Eleka.

He accused Governor Ayo Fayose of having given undue advantage to Olusola-Eleka.
Adeyeye’s defection is coming despite his promise before the primaries to support whoever emerges as candidate.

Explaining why he dumped the PDP, Adeyeye said the decision was the wish of his constituents.

“Leaving the PDP was not an easy decision to make. That was a party to which I have rendered invaluable service at the most trying period of its history.

“Expectedly patriotic leaders of the party appealed to me to reconsider my decision in the light of my previous services and loyalty to the party. But the issue was never about me as a person. It was about the interest of the very many people who associate with me and more importantly the collective interest and future of Ekiti people. For me politics has always been an opportunity to serve and make contribution towards the development of my community and the nation.

“Therefore where I am compelled to make a choice between loyalty to a political party and loyalty to my community, l will readily chose my community or state. Political parties come and go but the community remains. I cannot change my state or hometown but I can always change my party if I feel that it can no longer serve as a vehicle for our collective good as a people,” he said while addressing reporters in Ado-Ekiti, the state capital.