I am “Vindicated” by Aisha Buhari’s comment on BBC – Saraki

Posted by: Lolade in Politics Comments Off on I am “Vindicated” by Aisha Buhari’s comment on BBC – Saraki

Senate President, Senator Bukola Saraki on Friday said that the interview credited to Mrs Aisha Buhari that President Muhammadu Buhari’s administration has been hijacked by cabal.

Mrs Buhari had in interview with BBC said:

“Some people are sitting down in their homes folding their arms only for them to be called to come and head an agency or a ministerial position.”

Asked to name those who had hijacked the government, she refused, saying: “You will know them if you watch television.”

However, Saraki who spoke through in media aide on Social Media on twitter‎ said:

“To say there is government is now an understatement. What baffles me the most is the fact that they don’t even share same ideology.”

Mr. Saraki had said some individuals within Mr. Buhari’s government were running a “government within the government”.

Mr. Saraki has been facing corruption charges at the Code of Conduct Bureau since September 2015.

He was also arraigned alongside his deputy, Ike Ekweremadu, in a separate case in which they were accused forgery in the Senate.

But, the forgery case was latter withdraw by Federal government.

“Folks who campaigned for Buhari and APC‎ because they believe in him and manifesto of APC are being sidelined for those who don’t care‎.

‎”‎if an election was to hold tomorrow, our party will find it hard to win, simply because most that have been empowered aren’t party faithful.”‎ 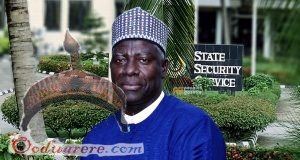