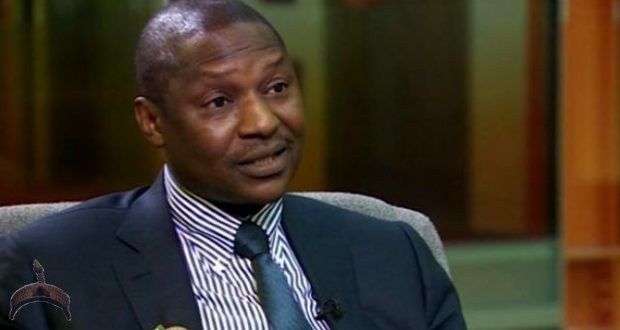 Posted by: AbubakarMuhd in Politics Comments Off on Malami Rejects Call To Pay Recovered Loot Into Federation Account

The Attorney – General of the Federation and Minister of Justice , Mr. Abubakar Malami ( SAN) , on Tuesday , rejected the call by human rights lawyer , Mr . Femi Falana ( SAN) , for stolen funds especially the ones linked to the late Head of State , General Sani Abacha, to be returned to the Federation Account .

Malami , through his spokesperson , Dr . Umar Gwandu , was reacting to the suggestion recently made by Falana in Akure , Ondo State, that the recovered loot ought to be paid in the Federation Account and shared among the Federal Government and the federating units .

He said Falana made “ erroneous assertion ” on the process of disbursement and use of recovered stolen funds based on the provisions of the Revenue Mobilization , Allocation and Fiscal Commission Act and Section 153 ( 1 ) ( n ) of the Nigerian Constitution .

This he said , “ depicts a rash analysis devoid of clear legal foundations” .

The minister said the RMAFC Act “ has nothing specific on funds recovered from indicted public officers or assets recovered internationally” .

He noted that Section 80 ( 1 ) of the 1999 Constitution of the Federal Republic of Nigeria ( as amended ) “ contemplates exceptions to funds not payable into the federation account.”

He added , “ The recovery of stolen assets and the subsequent uses to which these funds may be employed are subject to international agreements between Nigeria and the affected countries , thereby bringing conflict of laws into contemplation .

“ Importantly also , these repatriated funds are based on cooperation and mutual assistance agreements , especially the United Nation Convention against Corruption and Implementation of the Global Forum on Asset Recovery ( GFAR ) Principles on the Repatriation of Stolen Assets .”

Previous: Things happen in Nigeria, and you just can’t but laugh.
Next: #FreeEdmundNow