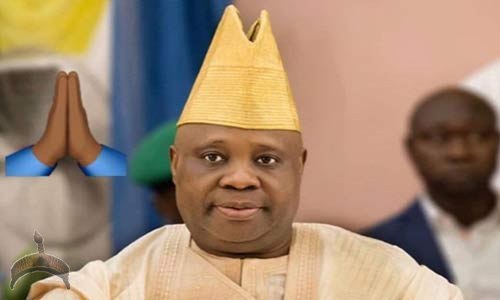 Posted by: Lolade in Politics Comments Off on Supreme Court rules on Adeleke’s application

The Supreme Court has validated the judgement of the Court of Appeal which earlier struck out a motion challenging the educational qualifications of Osun State politician, Ademola Adeleke.

The court in a decision on Thursday agreed with an earlier ruling of the appeal court that the application was brought ‘outside of time’ at a High Court of the Federal Capital Territory where a decision was made nullifying Mr Adeleke’s candidacy in the Osun Governorship polls.

According to the lawyer, the apex court agreed with the Peoples Democratic Party and Mr Adeleke that the High Court’s decision on the matter was a nullity.

Following an application by two members of the All Progressives Congress, Wahab Raheem and Adam Habeeb, at a High Court of the FCT, the judge, Othman Musa, decided that Mr Adeleke did not qualify to take part in the governorship elections on the ground that he had failed to obtain a secondary school degree.

Dissatisfied, Mr Adeleke approached the Court of Appeal with a number of objections including the timing of the matter at the lower court.

Mr Adeleke, through his lawyer, Mr Owolade, argued that the case involved a pre-election matter and the APC members approached the lower court rather late, making it impossible for the high court to exercise jurisdiction on the issue.

In a decision in May, the Court of Appeal agreed with the PDP that the application involved a pre-election matter which ought to have been filed within 14 days from the date of the course of action.

The court said the failure of the applicants to bring their request within the specified time made it impossible for the High Court to exercise jurisdiction on the matter.

“The trial court was wrong to have dismissed the applicant’s objection at the lower court. The issue of lack of jurisdiction can be raised at any point even in an appeal before this court or at the Supreme Court for the first time.

The appellate court also said the documents presented at the lower court indicated that Mr Adeleke sat for his WAEC exams in 1981.

It added that the failure of Mr Adeleke to correct errors in his result sheets before submitting the same to INEC “could not be interpreted to suggest that Mr Adeleke provided false documents to INEC$.

“Errors in a document do not amount to falsehood. What the respondent did is to exploit the mistakes in his submitted form to hold that he was not qualified.

“The trial court disregarded the documents as if it never existed. Even the documents it chose to consider, it did not evaluate properly. The trial court appeared to have ignored the fact that the principal appeared to testify if the information submitted to the fourth respondent was true or false. If the principal said that there were many errors in the result sheet, he must be believed,” Mr Agim ruled.

Apparently aggrieved by the appellate court decision, the two APC members appeared before the Supreme Court for a further determination of the matter.

Explaining the judgement of the Supreme Court, Mr Owolade said the apex court hinged its decision on the timing of the application and the fact that Mr Adeleke’s documents showed he partook in the 1981 WEAC exams.

“Two APC stalwarts left our territory and went to Bwari, a suburb of Abuja, with their application against our clients certification. On our part we said that it was a pre-election matter. That the time for it to have been brought had passed. So the application was statute bad.

“Ordinarily it should be thrown away but judgement was delivered against us.

“But at the Court of Appeal, the judge Emanuel Agim gave a brilliant judgment which considered all the nitty-gritty of the case and he agreed with our submissions.

Despite getting a favourable ruling on his educational qualification, Mr Adeleke’s governorship ambition was recently thwarted. The Supreme Court ruled in favour of the All Progressives Congress and incumbent Governor Gboyega Oyetola in Mr Adeleke’s suit challenging Mr Oyetola’s electoral victory.