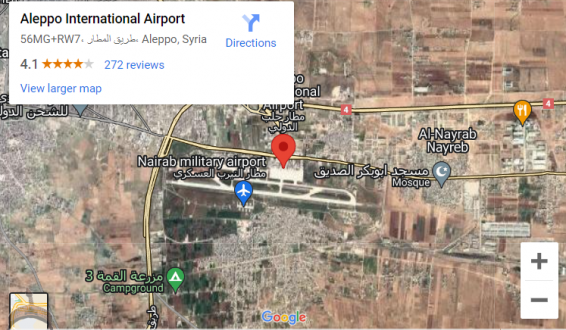 Posted by: BalogunAdesina in World News Comments Off on Russian Mod Reveals Results Of Recent Israeli Attack On Syrian Airports

The August 31 Israeli attack on Syria targeted the international airports of Aleppo and Damascus, Major General Oleg Egorov, deputy head of the Russian Reconciliation Center in Syria, confirmed on September 1.

“Eight F-16 tactical fighters of the Israeli Air Force, without entering Syrian airspace, launched eight guided missiles and eight guided air bombs at the facilities of the Nairab [Aleppo] and Duwali [Damascus] airports,” Egorov said at a briefing. “Three missiles were destroyed by the duty air defense forces of the Syrian Arab Republic.”

According to the Russian officer, five Syrian soldiers were wounded as a result of the attack. An antenna post of a Syrian S-125 air-defense system and two depots with military equipment were also destroyed. Moreover, the officer said that the runway of Aleppo International Airport was hit. This was later confirmed by the Syrian Transport Ministry, which said that the airport will resume operations on September 2.

Earlier, the Syrian Foreign Ministry revealed in a message sent to the United Nations that the Israeli attack also destroyed civilian navigation equipment in the international airports of Aleppo and Damascus.

In his first comment on the attack, Foreign Minister Faisal Mekdad said that Syria will not back down and Israel is playing with fire. The minister warned that Israelis will pay the price “sooner or later”.

This was one of Israel’s largest attacks on Syria this year. Exactly a week earlier, a similar large-scale aerial attack targeted a sensitive military research complex in Hama. The complex sustained heavy damage. Furthermore, secondary explosions and fires wounded 14 civilians.

The recent attacks on Syria were a part of Israel’s “War-Between-Wars” military campaign, which is meant to push Iran and its allies out of the war-torn country as well as to prevent them from developing their offensive capabilities.

Previous: “I wish this reaches this young lady’s parents!!!
Next: The Kiev regime planned to use IAEA team as ‘human shields’ – Russia