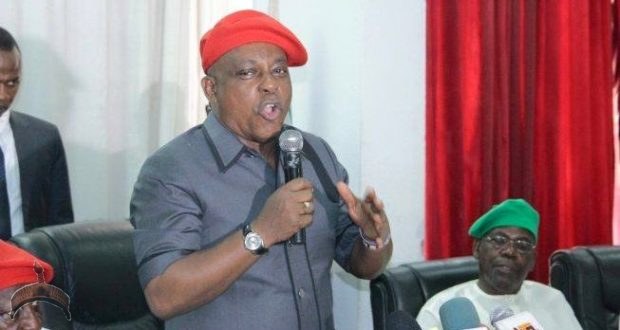 Secondus: Nigeria May Cease To Exist If Ekiti Election Is Rigged

Speaking at the flag-off of PDP’s local government election campaign in Rivers state, the opposition leader said his party would resist any try to thwart the will of the people.

He alleged that the All Progressives Congress (APC) rigged the Kaduna local government election, where his party won four LGAs, while APC swept 14.

“The forthcoming Ekiti state election is going to be a litmus test. We warn that if you attempt to rig Ekiti, it will be a recipe for crisis and we don’t know whether there will be Nigeria or not,” he said.

“We will never allow an evil individual to destroy this nation or to destroy our state. If you like wait for us, we refuse to be intimidated. We saw all that happened in Kaduna last Saturday. PDP won in all local government areas, but they over-turned the results.”

Secondus said that with the help of Nigerians, PDP is united to take over from the APC in 2019.

He said his party would provide the leadership that will create platforms of the unity for Nigerians.

During a dinner with the southwest caucus of APC at the presidential villa in Abuja earlier in the week, President Muhammadu Buhari urged the members of his party to take the mission to rescue Ekiti from PDP seriously.